India will take all 'necessary measures' to protect & secure itself: Prez Kovind

The Indian Air Force (IAF) launched a counter-terror operation against a JeM training camp in Balakot. 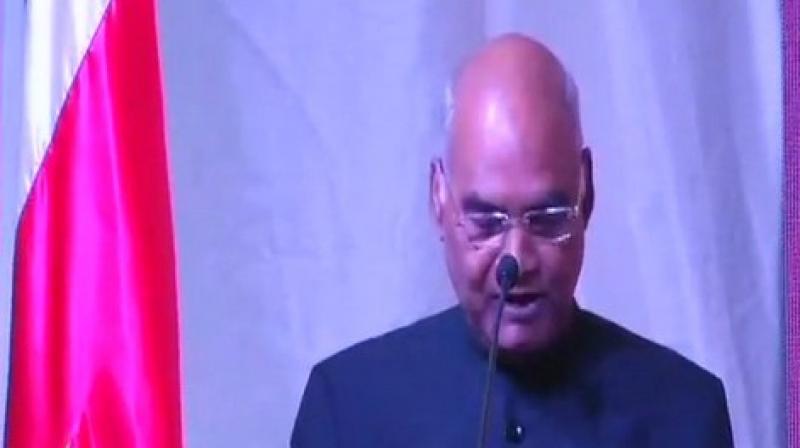 Kovind, the first-ever Indian head of state to visit Croatia, arrived here on Monday along with his wife Savita Kovind on the first leg of his three-nation visit. (Photo: ANI)

Croatia: India will take all "necessary measures" to protect and secure itself, President Ram Nath Kovind has said in Croatia, referring to the IAF strikes on a terrorist camp in Pakistan's Balakot following the Pulwama attack by a JeM suicide bomber. Tensions between India and Pakistan escalated last month after Pakistan-based terror group Jaish-e-Mohammed (JeM) killed 40 CRPF personnel in Jammu and Kashmir's Pulwama district on February 14.

The JeM claimed responsibility for the attack. The Indian Air Force (IAF) launched a counter-terror operation against a JeM training camp in Balakot. The next day, Pakistan Air Force retaliated and downed a MiG-21 in an aerial combat and captured its pilot, who was handed over to India on March 1. Kovind, the first-ever Indian head of state to visit Croatia, arrived here on Monday along with his wife Savita Kovind on the first leg of his three-nation visit.

On Tuesday, he thanked the Croatian government for its steadfast support against terrorism. Speaking at an event here, Kovind said: "As for India, we have made it clear that we will take all necessary measures to protect ourselves, to secure ourselves, so that we can provide for the welfare of our people." "Peace and security are critical to foster the well-being of humanity.

We are deeply grateful to the Government of Croatia for its steadfast support against terrorism. The world needs to take decisive actions against those who harbour and support terrorists," the president said. He also invited the Indian diaspora in the country to invest in India and be a part of its transformational journey. "The Indian economy is today an important engine of global growth. It is the fastest growing major economy, with robust economic indicators... I would, therefore encourage you to visit India, and experience the transformative changes happening," he said.

Noting that initiatives like 'Make in India', 'Digital India' and 'Start-up India' provide new business prospects, Kovind said India and Croatia are keen to deepen their relations, particularly on the economic side. "A good foundation has already been laid, with investments by both sides.

There is good potential to strengthen trade, investment and technology cooperation. Your support to explore new areas of collaboration would be invaluable," the president said. Kovind said Croatia has had affinity with India for centuries and has made an outstanding contribution to the promotion of Indian languages, philosophy, history and culture. "Gurudev Rabindranath Tagore visited here in 1926, and influenced many Croatian poets and writers.

The Indology Department of Zagreb University has made an outstanding contribution to the study and promotion of Indian languages, philosophy, history and culture in Croatia. I am impressed to know that it regularly organises conferences on Vedas and Puranas," he said. The values of democracy, pluralism and peace that India stands for, and its economic growth story, have combined to make India a force to be reckoned with, Kovind said. "We stand ready to work with everyone to find solutions to global challenges. We are ready to extend a hand of friendship to one and all," he said.