Their meeting came against backdrop of Indian govt revoking the special status to J&K and bifurcating state into two Union Territories. 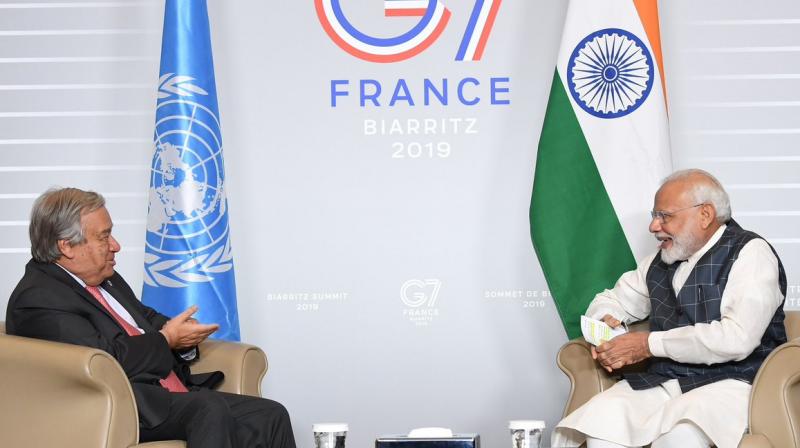 Modi met Guterres on the sidelines of the G-7 Summit being held in this picturesque southwestern seaside French town. (Photo: Narendra Modi | Twitter)

Modi met Guterres on the sidelines of the G-7 Summit being held in this picturesque southwestern seaside French town. The Prime Minister arrived in Biarritz from Manama, the capital of Bahrain after concluding the first-ever prime ministerial visit to the Gulf nation.

"Excellent meeting with the Secretary General of UN, Mr Antonio Guterres. We had extensive deliberations on key issues, most notably ways to strengthen the efforts to mitigate climate change," Prime Minister Modi said in tweet.

Excellent meeting with the Secretary General of @UN, Mr. @antonioguterres. We had extensive deliberations on key issues, most notably ways to strengthen the efforts to mitigate climate change. pic.twitter.com/S5P6MmJT4A

The Prime Minister's Office said in a tweet the two leaders had "fruitful discussions" on a wide range of subjects. "PM Narendra Modi met with UNSG Antonio Guterres on the margins of G7 summit in Biarritz. Good exchange of views on India's participation at the Climate Action Summit at the UN and other issues of mutual interest," Ministry of External Affairs spokesperson Raveesh Kumar tweeted.

Their meeting came against the backdrop of the Indian government revoking the special status to Jammu and Kashmir and bifurcating the state into two Union Territories. The two leaders are here to attend the G-7 Summit.

Modi arrived in Biarritz from Bahrain after concluding his three-nation tour to France, the UAE and Bahrain. Earlier this month, Guterres urged India and Pakistan to exercise "maximum restraint" and refrain from taking steps that could affect the status of Jammu and Kashmir.

He had also highlighted the Simla Agreement which rejects any third-party mediation on the issue after Islamabad asked him to play his "due role" following New Delhi's decision on Kashmir. A rare closed-door consultations on Kashmir by the Security Council ended without any outcome or statement from the powerful 15-nation UN organ, dealing a huge snub to Pakistan and its all-weather ally China to internationalise the issue, which an overwhelming majority stressed is a bilateral matter between New Delhi and Islamabad.

The meeting of Modi and Guterres also comes a day after Pakistan Foreign Minister Shah Mehmood Qureshi called the UN chief to apprise him about the "evolving and delicate situation" in Jammu and Kashmir.

Tensions between India and Pakistan spiked after New Delhi abrogated provisions of Article 370 of the Constitution to withdraw Jammu and Kashmir's special status and bifurcated the State into two Union Territories on August 5.

India has categorically told the international community that the scrapping of the Article 370 was an internal matter and also advised Pakistan to accept the reality. Guterres had told Qureshi that he was ready today as he was before to defuse the tension and will meet Prime Minister Modi in France.