At least 31 people were killed and more than 300 others injured in the violence unleashed by Dera Sacha Sauda supporters. 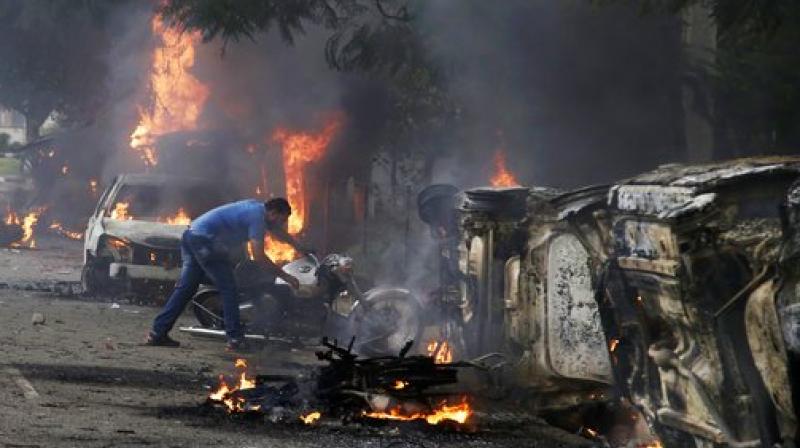 Supporters of the Dera Sacha Sauda vandalised vehicles in Panchkula. Police used water cannon in an attempt to disperse the crowd. (Photo: AP)

London: In the wake of violence in Haryana and Punjab unleashed by Dera Sacha Sauda supporters the United Kingdom on Saturday issued a safety advisory for its citizens travelling to India.

The advisory warned of possibility of further violence after the conviction of self-styled godman Gurmeet Ram Rahim Singh in a rape case.

Thousands of followers of Ram Rahim, who is the head of Sirsa-based Dera Sacha Sauda, went on the rampage on Friday, setting fire to vehicles, buildings and railway stations soon after a special CBI court convicted him in a 2002 rape case.

The advisory issued by the UK government asked the India-bound travelers follow the advice of the local authorities, monitor local media and keep in touch with your travel company.

"The British Deputy High Commission and British Council offices in Chandigarh are closed until on Monday August 28, due to the possibility of further serious violence. Local road and rail travel may be significantly disrupted during this period," the advisory said.

Incidents of violence were reported today in parts of the states of Haryana (particularly in Sirsa and Panchkula), and Punjab, and the Union Territory of Chandigarh, following the conviction of the leader of the Dera Sancha Sauda spiritual organisation, Gurmeet Ram Rahim Singh.

At least 31 people were killed and more than 300 others injured in the violence unleashed by Dera Sacha Sauda supporters after Gurmeet Ram Rahim Singh was convicted in a rape case. While 28 were killed in Panchkula, three Dera supporters were killed in Sirsa, the headquarters of the cult.