Johnson replaced May, bringing to an end her crisis-plagued 3-year tenure that will be remembered for her failure to deliver Brexit. 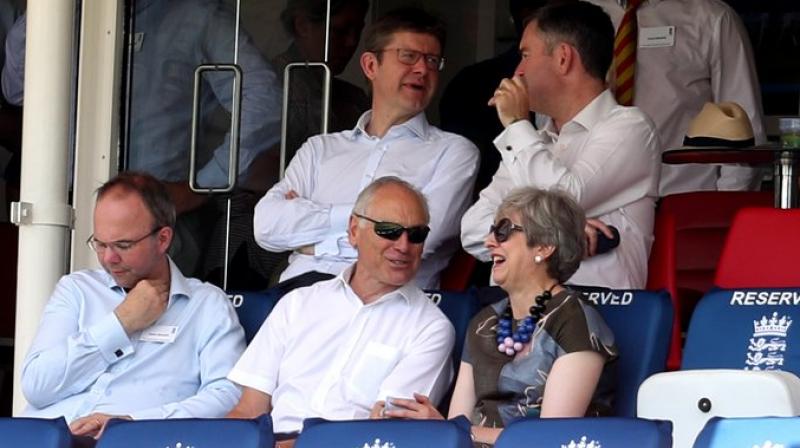 Former British prime minister Theresa May skipped seeing her successor fire up Conservative MPs on Thursday and instead spent her first day out of office enjoying one of her favourite pastimes – cricket. (Photo: Twitter)

London: Former British prime minister Theresa May skipped seeing her successor fire up Conservative MPs on Thursday and instead spent her first day out of office enjoying one of her favourite pastimes – cricket.

May, who remains a Conservative MP, was spotted at Lord’s cricket ground watching England take on Ireland – just as Boris Johnson was making his maiden address in parliament as the new prime minister.

Johnson replaced May as premier on Wednesday, bringing to an end her crisis-plagued three-year tenure that will likely be best remembered for her failure to deliver Brexit.

Britain’s second female leader, labelled the “zombie prime minister” by one columnist for her ability to stagger on despite multiple attacks, had appeared visibly drained in recent months by her fraught time in Downing Street.

But on Thursday she could be seen enjoying the comforts of the hospitality section at the spiritual home of cricket in northwest London, as England began to recover from a first-innings collapse against Ireland in the first-ever Test match between the two sides.

Under blisteringly hot sunshine -- that forecasters said could approach Britain’s all-time temperature record -- May was all smiles as she was handed a drink garnished with a lemon slice in a shaded area of the famous ground.

She was joined Thursday by Conservative colleagues David Gauke and Greg Clark, who left their respective roles as justice and business secretaries during a brutal Cabinet reshuffle Wednesday by Johnson.

All three will be joining more than a dozen other members of May’s disbanded cabinet now out of government and taking their places on the backbenches in parliament -- where they could prove problematic for the new leader.

Meanwhile Johnson was in typically bombastic mode during a first raucous and lengthy session in the House of Commons, in which he was repeatedly shouted at by opposing MPs and rallied Conservatives by vowing to get Brexit done.