Britain has no lockdown exit strategy in sight

The number of deaths related to COVID-19 in hospitals across the United Kingdom has risen above 20,000 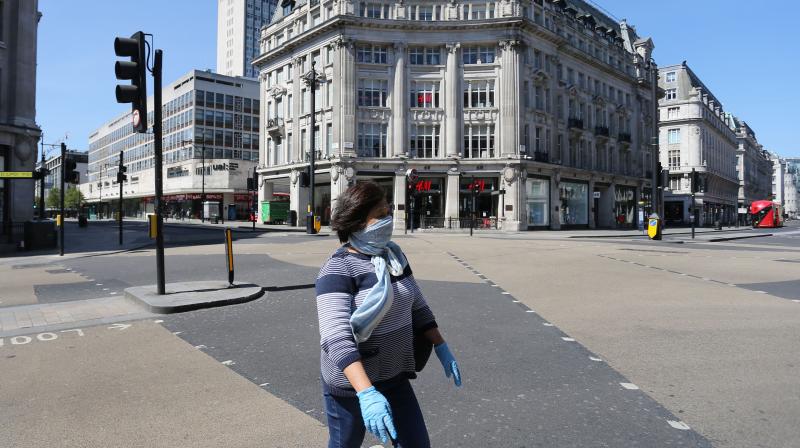 London: Britain’s stand-in leader resisted pressure on Sunday to explain how the government plans to ease a coronavirus lockdown that has been in place for a month, warning that hasty action could result in the second peak of infections.

Foreign secretary Dominic Raab, deputising for prime minister Boris Johnson as he recovers from COVID-19, said the government was working privately on how to move out of the lockdown but it would be irresponsible to speculate in public.

“We are at a delicate and dangerous stage and we need to make sure that the next steps are sure-footed,” Raab said during an interview on Sky News, urging the public to keep focusing on the current guidance to stay at home.

“We are proceeding very cautiously and we are sticking to the medical advice, the scientific advice, with the social distancing measures at this time, while doing all the homework to make sure that we’re prepared in due course for the next phase.”

The number of deaths related to COVID-19 in hospitals across the United Kingdom has risen above 20,000, the latest data showed on Saturday, with the overall figure likely to be significantly higher once deaths in care homes and hospices are tallied.

The economic news has been equally dire. Data released last week showed demand had slumped to an all-time low, retail sales had plunged by the most on record and government debt was surging.

With a Bank of England interest rate-setter warning that the economic contraction could be the worst in centuries, the data added to pressure on the government to give some indication of when and how people and businesses would be able to get to work.

Johnson, who spent a week in hospital in early April including three nights in intensive care, will return to work full-time on Monday and is “raring to go”, Raab said.

On his desk, Johnson will find an open letter from opposition Labour Party leader Keir Starmer arguing that the British government was falling behind the rest of the world in refusing to open up about how it would ease the lockdown.

“Simply acting as if this discussion is not happening is not credible,” Starmer wrote in the letter, which he posted on Twitter on Sunday.

He said he believed the government had been too slow to impose the lockdown, to increase the uptake of testing and to get personal protective equipment (PPE) to hospital and care home staff.

“We need to see a significant step-change in the government’s response to this pandemic. Decisions need to be taken quickly and communication with the public needs to be clearer,” he said.

On the issue of testing, the government has set itself a target of 100,000 tests per day by the end of April. Fewer than 29,000 tests were carried out on April 24, the most recent available data shows.

Raab said capacity now stood at 51,000 a day and he expected a surge in actual tests being carried out in the coming week.

“You always get the exponential increase in a project like this in the last week as the capacity comes on tap,” he said. “I think we’re going to see a big surge in the last week, and we’re on track to hit that target.”