The wounds of the Spanish conquest were ripped open afresh when Mexico's president urged Spain and the Vatican to apologize for the abuses. 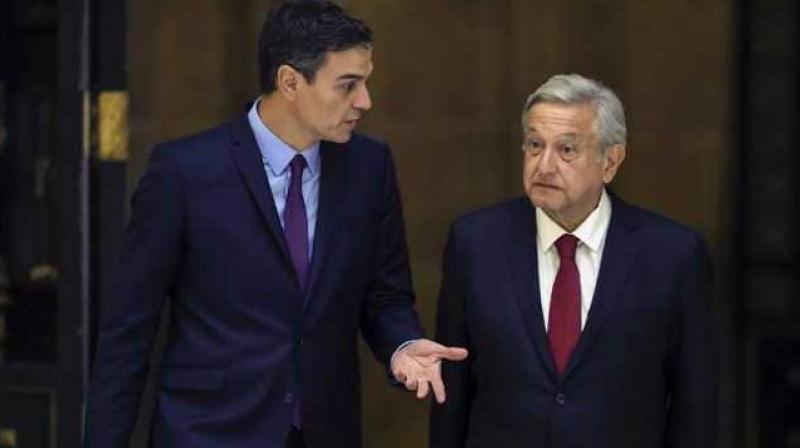 He made the remarks in a video, filmed at the ruins of the indigenous city of Comalcalco and posted on Facebook and Twitter. (Photo:AFP)

Mexico City: The 500-year-old wounds of the Spanish conquest were ripped open afresh on Monday when Mexico's president urged Spain and the Vatican to apologize for their "abuses" -- a request Madrid said it "firmly rejects."

Spain's centuries of dominance in the New World, backed by the Catholic Church, leapt from the history books to the headlines when Mexican President Andres Manuel Lopez Obrador called on Spanish King Felipe VI and Pope Francis to apologize for the conquest and the rights violations committed in its aftermath.

"I have sent a letter to the king of Spain and another to the pope, calling for a full account of the abuses and urging them to apologize to the indigenous peoples (of Mexico) for the violations of what we now call their human rights," Lopez Obrador said.

He made the remarks in a video, filmed at the ruins of the indigenous city of Comalcalco and posted on Facebook and Twitter.

"There were massacres and oppression. The so-called conquest was waged with the sword and the cross. They built their churches on top of the (indigenous) temples," added the anti-establishment leftist.

"The time has come to reconcile. But let us ask forgiveness first."

Spain's rejection was immediate and blunt.

"The government of Spain deeply regrets that the letter the Mexican president sent to his majesty the king, whose contents we firmly reject, has been made public," it said in a statement.

"The arrival, 500 years ago, of Spaniards to present Mexican territory cannot be judged in the light of contemporary considerations," it said.

"Our two brother nations have always known how to read our shared past without anger and with a constructive perspective."

Lopez Obrador made the remarks during a visit to the Mayan pyramids of Comalcalco, in his native Tabasco state, in southern Mexico.

He later visited the nearby city of Centla, the scene of the first battle between Spanish conquistador Hernan Cortes and the indigenous peoples of the land now known as Mexico, on March 14, 1519.

With the help of horses, swords, guns and smallpox -- all unknown in the New World at the time -- Cortes led an army of fewer than 1,000 men to defeat the Aztec empire, the start of 300 years of Spanish rule over Mexico.

The abuses continued until independence from Spain in 1821, and beyond, Lopez Obrador said.

"Thousands of people were murdered during this period. One culture and civilization imposed itself on another," he said later in a speech.

"There are still open wounds. It's better to recognize that abuses were committed, and mistakes were made. It's better to ask forgiveness and seek to be brothers in a historic reconciliation."

He added that he, too, planned to offer an apology, "because the repression of indigenous peoples continued after the colonial period."

Mexico has a complicated relationship with its colonial past.

Its history, culture, food and the Mexican people themselves are the product of "mestizaje," the mixing of the Old and New Worlds.

According to a government study, 98 percent of Mexicans have some combination of indigenous, European and African ancestry.

But although that mixture made modern Mexico -- and gave the world the gifts of chocolate, tacos de carnitas and Day of the Dead -- it is also a past tainted by violence, rape and oppression.

A folksy populist, he pulls no punches in going after traditional elites, and has sought to cast himself as a champion of Mexico's indigenous peoples.

But he had so far cultivated cordial relations with Spain and the Vatican, including during a visit to Mexico City by Spanish Prime Minister Pedro Sanchez earlier this year.

Sanchez, a fellow leftist, marked the occasion by presenting the Mexican president with his grandfather Jose Obrador's Spanish birth certificate, from 1893.