Tijn Kolsteren, who was diagnosed with brain cancer in May, launched the appeal only two days ago. 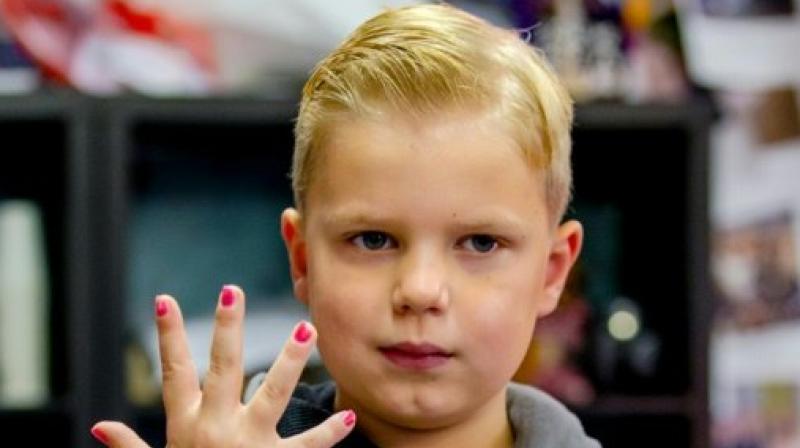 Tijn, a 6-year-old boy, shows his painted nails as he raises money during the "Serious Request" radio program at the House of Glass in Breda, The Netherlands. (Photo: AFP)

The Hague: A terminally ill Dutch six-year-old boy, who hoped to raise a few hundred euros for other sick children by daring people to paint their nails in garish colours, had raised more than one million by Friday.

Tijn Kolsteren, who was diagnosed with brain cancer in May, launched the appeal only two days ago but it has quickly fired the imagination of the Dutch public who had donated more than 1,270,000 euros ($1,326,000) at the last count.

"Paint your nails, make a donation and then challenge three of your friends to do the same," dares the donation page, which invites participants to share their pictures on social media using the hashtag #lakaan (meaning "the polish is on").

"Most poor children diagnosed with pneumonia don't live until the age of five," said the young boy on the site. "That's why we have to put up a fight."

Celebrities, politicians, presenters and actors have been among thousands of people who have posted pictures of their painted nails online, with far-right politician Geert Wilders plumping for deep red.

"I got really emotional when I heard the story about this little guy -- it made a really big impression on me," Prime Minister Mark Rutte said at his weekly press conference.

The appeal is part of a traditional event in The Netherlands where radio DJs lock themselves away for several days without food or drink to raise money. This year, proceeds are going to the Red Cross.

Although Tijn's cancer was diagnosed on May, it was only last week that his family learned that a course of chemotherapy had failed to reduce its size.

"Despite this bad news, we wanted to do something for children who won't maybe even make it to six," his father Gerrit told public television channel NOS.

"We came up with the idea together: Tijn had already painted his nails with a friend and liked it. I wanted to do something similar to the Ice Bucket challenge and men painting their nails is a bit taboo," he added, referring to the internet craze that raised millions.

The Dutch press hailed the boy as a hero, with the tabloid AD putting a picture of him dressed as a superhero under the headline "SuperTijn".