Trump 1st leader to congratulate him, says ‘he will be great’. 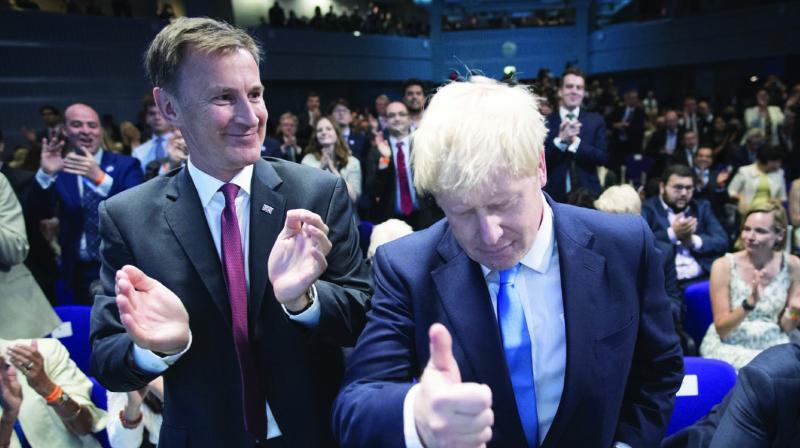 Jeremy Hunt (left) congratulates Boris Johnson after the announcement of the result in the ballot for the new Conservative party leader in London on Tuesday. Brexit hardliner Johnson won the contest to lead Britain’s governing Conservative Party on Tuesday and will become the country’s next Prime Minister. (Photo: AP)

LONDON: Boris Johnson won the race to become Britain’s next Prime Minister on Tuesday, heading straight into a confrontation over Brexit with Brussels and Parliament, as well as a tense diplomatic stand-off with Iran.

The former London mayor easily beat his rival, foreign secretary Jeremy Hunt, in a vote of grassroots members of the governing Conservative Party.

He is expected to be confirmed as Prime Minister on Wednesday when Theresa May formally tenders her resignation to Queen Elizabeth II.

US President Donald Trump was the first world leader to offer his congratulations, saying: “He will be great!”

It is a triumph for a man who has always coveted the Premiership. But Mr Johnson, known for his jokes and bluster, is taking over at a time of immense political upheaval.

Three years after the referendum vote to leave the European Union, Britain remains a member amid continued wrangling in a divided Parliament on how to
proceed. Mr Johnson led the referendum “Leave” campaign and — after Ms May delayed Brexit twice — insists the latest deadline must be met, with or without a divorce agreement with the EU.

“We’re going to get Brexit done on October 31,” he declared in a speech to party members in London, after winning 66 percent of almost 140,000 votes cast.

However, Brussels says it will not renegotiate the deal it struck with May to ease the end of a 46-year partnership — even after British MPs rejected it three times.

EU Brexit negotiator Michel Barnier said Tuesday he wanted to work with Johnson “to facilitate the ratification of the withdrawal agreement and achieve an orderly Brexit”.

Ursula von der Leyen, who will take over as head of the European Commission on November 1, congratulated Johnson but warned of “challenging times ahead of us”.

Although Parliament dislikes Ms May’s deal, Mr Johnson faces significant opposition from MPs to his threat to leaving with no deal, including from Conservative colleagues.

Several ministers said they will not serve under Mr Johnson, warning that severing ties overnight with Britain’s closest trading partner is deeply irresponsible.

But Mr Johnson insisted he could change the atmosphere in Parliament, saying: “Like some slumbering giant we are going to rise and ping off the guy ropes of self-doubt and negativity.”

One Brexiteer MP added: “The clouds have lifted.”

However, Mr Johnson’s premiership is vulnerable.

His government will command a majority of just two — 320 votes to 318 — in Parliament’s lower House of Commons.

Colleagues who disagree with Mr Johnson are willing to give him a chance to get a Brexit deal, at least over Parliament’s impending six-week summer recess.

But if “no deal” looks likely in September, many MPs have vowed to stop him — a move that could trigger an early election.

The main opposition Labour party is not expected to force a confidence vote this week, but challenged him to call an election.

However, both Labour and the Conservatives are struggling to appeal to a public deeply divided over Britain’s future, facing a pincer movement from Nigel Farage’s eurosceptic Brexit Party and the pro-EU Liberal Democrats.