Two weeks after lifting lockdown, France had an increase of 0.2%, below the average 0.3% increase of the past seven days in new virus cases 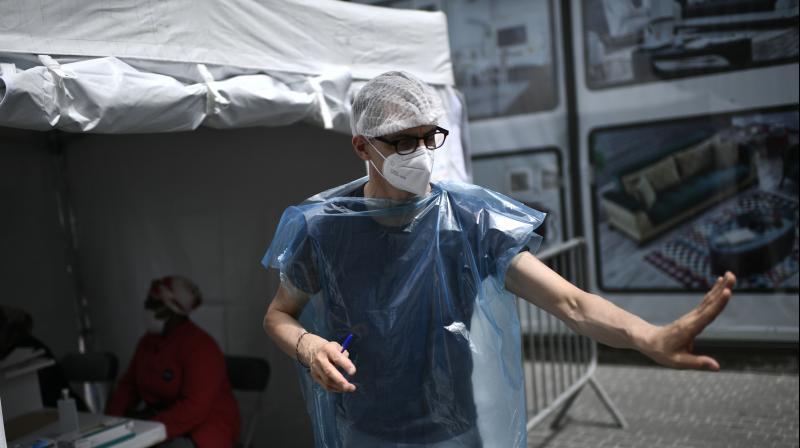 A health staff member instructs patients to stop as Seine-Saint-Denis French department inhabitants wait to be tested for the novel coronavirus Covid-19 at a free mobile testing site in Clichy-sous-Bois. (AFP)

Paris: Coronavirus infection rates in France have slowed further and the number of COVID-19 patients in hospital and intensive care continued to fall, health ministry figures showed, a sign that social distancing is keeping contagion in check for now.

Italy and Spain have also reported confirmed cases going up by 0.3% on average in the past seven days.

The number of people in hospital with coronavirus in France fell by 205 to 17,178 on Saturday, continuing a gradual decline that has continued for more than five weeks since a high of 32,292 on April 14. The number of people in intensive care fell by 36 or 2.1% to 1,665, a slide that has been uninterrupted for six weeks since the April 8 peak at 7,148.

Both numbers are key measures of a national health system’s ability to cope with the epidemic.

The French government is watching the infection rate and the hospital numbers closely in order to decide whether to loosen lockdown measures further in the weeks ahead.

The ministry said France’s cumulative coronavirus death toll stood at 28,332, an increase of 117 or 0.4% compared to Thursday. Friday’s death toll data were not available.

The ministry said it will update the death toll again on Monday.

After showing a higher death toll than Spain for 10 days, France again fell below Spain, which reported an increase of several hundred deaths on Friday.

On Saturday, Spain’s cumulative death toll stood at 28,678, or 346 more than France, making Spain again the country with the world’s fourth-highest death toll after the United States, Britain and Italy.