The Malaysian Airlines flight was blown out of the sky over conflict-wracked east Ukraine in 2014 en route from Amsterdam to Kuala Lumpur. 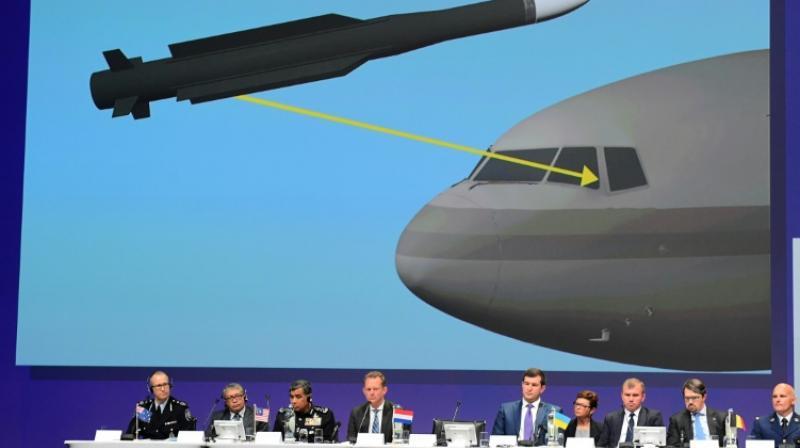 All 298 passengers and crew, most of them Dutch, were killed in the disaster. In all there were 17 nationalities on board including Australians, Britons, Malaysians and Indonesians. (Photo: AFP)

Utrecht: Investigators probing the 2014 downing of flight MH17 said on Thursday for the first time that the missile which shot down the plane over eastern Ukraine travelled from a Russian military brigade.

The Joint Investigation Team “has come to the conclusion that the BUK-TELAR that shot down MH17 came from 53rd Anti-aircraft Missile Brigade based in Kursk in Russia,” top Dutch investigator Wilbert Paulissen said.

“The 53rd Brigade forms part of the Russian armed forces,” he told reporters at a press conference in the Netherlands.

The Malaysian Airlines flight was blown out of the sky over conflict-wracked east Ukraine on July 17, 2014 en route from Amsterdam to Kuala Lumpur.

All 298 passengers and crew, most of them Dutch, were killed in the disaster. But there were 17 nationalities on board including Australians, Britons, Malaysians and Indonesians.

The investigators had previously concluded that the plane was brought down by a Russian-made BUK missile system brought in from Russia and fired from territory in Ukraine held by Moscow-backed rebels. But they have stopped short of directly saying who pulled the trigger.

Now the team has painstaking recreated the route taken by the missile convoy from Kursk across the border into Ukraine using videos and photos.

Paulissen added the team had “ascertained that the BUK-TELAR has a number of unique characteristics. These characteristics as such served as a type of fingerprint for the missile.” Moscow has repeatedly denied any involvement in the downing of the Boeing flight 777, putting the blame instead on Kiev.

The probe being led by The Netherlands is focusing on some 100 people suspected of having played an “active role” in the incident, but investigators have not yet publicly named any suspects.

Chief investigator Fred Westerbeke said Thursday the probe was now in its “last phase” but added there was “still work to be done”.

Over the past years “we’ve gained a lot of proof and evidence but we are not ready yet” to move towards bringing charges, he told the press conference.

Dutch officials have announced that the trial of any suspects arrested in the shooting down of flight MH17 will be held in the Netherlands under an agreement reached with the countries leading the joint probe.