Theresa May said Britain's terror threat level had been raised to critical - meaning another attack may be imminent. 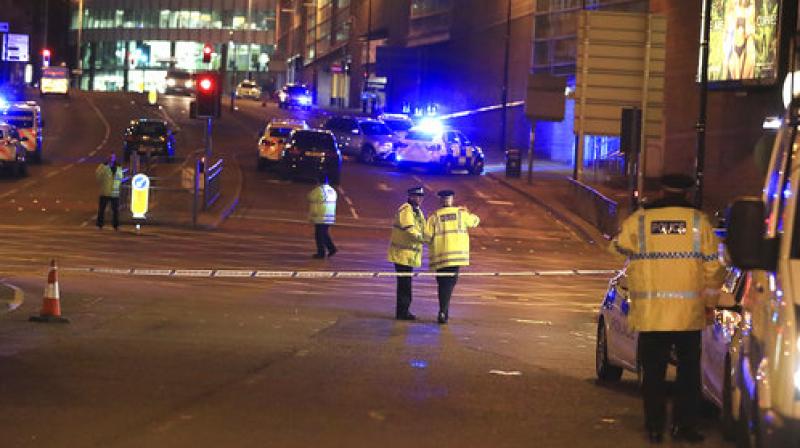 Emergency services work at Manchester Arena after reports of an explosion at the venue during an Ariana Grande gig in Manchester, England Monday. (Photo: PTI)

Manchester: As officials hunted for accomplices of a suicide bomber and Britain's prime minister warned another attack could be "imminent," thousands of people poured into the streets of Manchester in a defiant vigil Tuesday for victims of a blast at a pop concert - the latest apparent target of Islamic extremists seeking to rattle life in the West.

The attack left at least 22 dead, including an 8-year-old girl, shattering the revelry at a show by American singer Ariana Grande, where strains of electric pop and the sways of innocent young fans quickly gave way to an explosion, a flood of screams and a stampede of panicked concert-goers, many clutching pink balloons and wearing the kitten-ear headbands popularized by Grande.

Touching on that disconnect, British Prime Minister Theresa May said: "We struggle to comprehend the warped and twisted mind that sees a room packed with young children not as a scene to cherish but as an opportunity for carnage."

May said Britain's terror threat level had been raised to critical - meaning another attack may be imminent. The status means armed soldiers could be deployed instead of police at public events including sports matches. The threat level had been at the second-highest rung of "severe" for several years.

The Islamic State group claimed responsibility for the blood bath Monday, though a top American intelligence official said the assertion could not be verified. Manchester Police Chief Ian Hopkins identified the bomber as 22-year-old Salman Abedi, who authorities said died in the attack. Police raided two sites in the northern English city, setting off a controlled explosion in one, and arresting a 23-year-old man in a third location.

May said Abedi was born and raised in Britain and a European security official said he was of Libyan descent. The official spoke on condition of anonymity because he was not authorized to comment on ongoing investigations.

At least 20 heavily armed, helmeted police surrounded a modest red brick house listed as Abedi's address in a mixed Manchester suburb at midday on Tuesday and blasted down the door.

"It was so quick. These cars just pulled up and all these police with guns, dogs, jumped out of the car and said to us: 'Get in the house now,'" said Simon Turner, 46, who lives nearby. Later, forensic officers in white coveralls were seen going in and out of the property.

Details on Abedi were slow to trickle out. He was described by neighbors as a tall, thin young man who often wore traditional Islamic dress, but few said they knew him well.

Alan Kinsey, 52, who lives across the street, said his neighbor would often get picked up by another young man in a Toyota and often returned late at night. "I thought he worked in a takeaway or something" because of his late hours, Kinsey said.

Police also searched an apartment in a nearby area that British media reported belonged to Abedi's brother, Ismail.

Late Tuesday, thousands of people, some holding up signs proclaiming "I Love MCR" - an abbreviation for Manchester - held a moment of silence at a vigil for the victims. Lord Mayor Eddy Newman and the city's police chief were among the speakers in front of City Hall in Albert Square, where a banner with a website for a Muslim group said "Love for all, Hatred for None."

May called raising the country's terror threat level and deploying soldiers to patrol key sites a "proportionate and sensible response" to the suicide bombing. There are two major sports events in London on Saturday, with Wembley Stadium hosting soccer's FA Cup final, which Prince William is due to attend, and Twickenham hosting rugby's Premiership final.

Monday's bombing made Manchester Arena, one of the largest indoor concert venues in Europe, the latest apparent target of Islamic extremists striking at the heart of Western culture, an ideology baffling to the panicked young faces emerging from the concert.

Among those confirmed killed was Georgina Callander, whose death was reported by her former school, which posted a photo of her in her school uniform on its website and described her as a "lovely" and "very popular" young woman. Also killed was 8-year-old Saffie Roussos, who a teacher called "simply a beautiful little girl in every aspect of the word" who was warm, kind, "and unassuming, with a creative flair."

The little girl's mother and sister were among the 59 wounded, which included at least 12 children under the age of 16.

Grande, who was not injured in the blast, tweeted: "broken. from the bottom of my heart, i am so so sorry. i don't have words."

The bombing took place after Grande closed the show with "Dangerous Woman" and left the stage and the audience streamed toward the city's main train station. It scattered bolts and other metal scraps, apparently intended to maximize the bloodshed. People tumbled over guardrails and one another clawing toward an escape.

"There was this massive bang. And then everyone just went really quiet. And that's when the screaming started," said 25-year-old Ryan Molloy. "As we came outside to Victoria Station, there were just people all over the floor covered in blood."

The attack sparked a nightlong search for loved-ones - parents for the children they had accompanied or had been waiting to pick up, and friends for each other after groups were scattered by the blast. Twitter and Facebook lit up with heartbreaking appeals for the missing.

"I've called the hospitals. I've called all the places, the hotels where people said that children have been taken and I've called the police," Charlotte Campbell tearfully told ITV television's Good Morning Britain breakfast show. Campbell's 15-year-old daughter, Olivia, had attended the show with a friend who was wounded and being treated in a hospital.

"She's not turned up," Campbell said of her daughter. "We can't get through to her."
Hayley Lunt, who brought her 10-year-old daughter Abigail to the show, her very first concert, said they ran as fast as they could once the explosions rang out. "What should have been a superb evening," Lunt said, "is now just horrible."

Some concert-goers said security had been haphazard before the show, with some people being searched and others not. However, authorities would not say whether the bomber blew himself up inside or outside the arena, so it wasn't clear if rigorous bag screening or additional security would have helped prevent the deaths and injuries. The venue tweeted on Monday night that it happened "outside the venue in a public space."

Around the United Kingdom and across Europe, the attack brought fear and mourning.
At Buckingham Palace, Queen Elizabeth II marked a moment of silence alongside her husband Prince Philip as well as Prince Charles and his wife Camilla. In Rome, the lights of the Colosseum and Trevi Fountain were darkened.

US President Donald Trump, on a visit to the West Bank city of Bethlehem, called the perpetrators "evil losers" and said "this wicked ideology must be obliterated."

Manchester, 160 miles (260 kilometers) northwest of London, is one of Britain's largest cities. The attack was the deadliest in Britain since four suicide bombers killed 52 London commuters on subway trains and a bus in 2005.

Islamic State's claim of responsibility echoed others the group has made for attacks in the West but with vague details that left open the possibility it was an opportunistic attempt at propaganda. Manchester itself has seen terror before, but not this deadly.

The city was hit by a huge Irish Republican Army bomb in 1996 that leveled a swath of the city center. More than 200 people were injured, although no one was killed.

The bombing also elicited painful memories of the 2015 terror attacks in Paris, where most of the 130 killed were at the Bataclan concert hall.