More than half the global fatalities have been reported in the hardest-hit United States, Brazil, Mexico and India 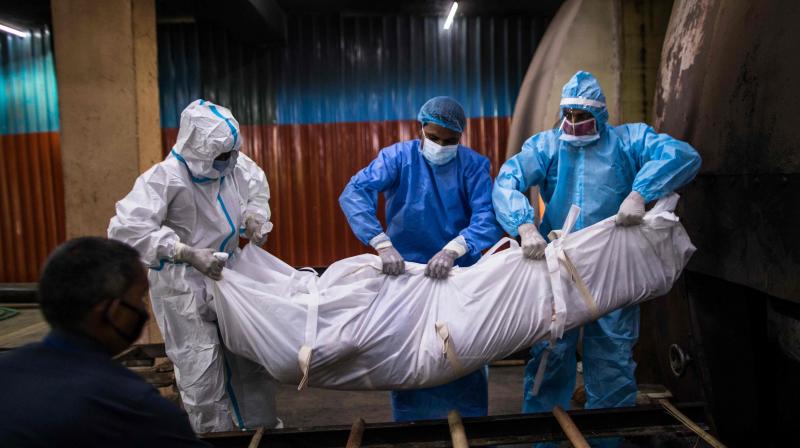 A relative (L) along with workers wearing Personal Protective Equipment (PPE) place the body of a person who died from the COVID-19 coronavirus before cremation in a furnace at the Nigambodh Ghat cremation ground, in New Delhi. (AFP)

Paris: The global death toll from the new coronavirus has surpassed 800,000, according to an AFP count on Saturday, with numerous countries ramping up restrictions in an effort to battle an eruption of new cases.

Western Europe, particularly Spain, Italy Germany and France, has been hit with infection levels not seen in many months, sparking fears of a fully-fledged second wave.

And in Asia, South Korea became the latest country to announce it would boost restrictions to try to stem a new outbreak, after largely bringing the virus under control.

Across the world, the number of deaths has doubled to just over 800,000 since June 6, with 100,000 fatalities in the last 17 days alone, while more than 23 million cases have been reported.

Latin America is the region the most affected, while more than half the global fatalities have been reported in the hardest-hit United States, Brazil, Mexico and India.

The surging numbers come after the UN health agency said Friday that the world should be able to rein in the pandemic in less than two years.

World Health Organization chief Tedros Adhanom Ghebreyesus sought to draw favourable comparisons with the flu pandemic of 1918 which cost the lives of as many as 50 million people.

"We have a disadvantage of globalisation, closeness, connectedness, but an advantage of better technology, so we hope to finish this pandemic before less than two years," he said.

"(By) utilising the available tools to the maximum and hoping that we can have additional tools like vaccines, I think we can finish it in a shorter time than the 1918 flu."

The WHO also recommended children over 12 years old now wear masks in the same situations as adults as the use of face coverings helps stop the virus spread.

With no usable vaccine yet available, the most prominent tool governments have at their disposal is to confine their populations or enforce social distancing.

South Korea announced ramped up restrictions on Saturday, after 332 new cases were reported in the past 24 hours -- the highest daily figure since early March.

"We are at a very precarious stage where we could see the beginning of a nationwide second wave," Health Minister Park Neung-hoo said at a press briefing.

The expanded measures include restrictions on gatherings and activities including professional sports, which will be played behind closed doors again, while beaches nationwide will close.

Italy -- once the European epicentre of the virus -- said Saturday it had registered more than 1,000 new infections in the past 24 hours, the highest level since the end of a punishing lockdown in May.

The story is similar across Spain, Germany and France.

The Rome region also said it had recorded a record number of cases in the past 24 hours, a rise health officials blamed on people returning from holiday.

Most of those infected are young people who are not showing symptoms, the Italian capital's health official Alessio D'Amato said, warning them to stay at home.

"Don't feel invincible," he urged them.

In Germany, a university launched a series of pop concerts under coronavirus conditions, hoping the mass experiment with 2,000 people can determine whether large events can safely resume.

Elsewhere, Lebanon launched two weeks of measures on Friday including nighttime curfews, as the country is still dealing with the fallout from a huge explosion in Beirut that killed scores of people.

"What now? On top of this disaster, a coronavirus catastrophe?" said 55-year-old Roxane Moukarzel.

Officials fear Lebanon's fragile health system would struggle to cope with a further spike in COVID-19 cases, especially after some hospitals near the port were damaged in the explosion.

The Americas have borne the brunt of the virus in health terms, accounting for more than half of the world's fatalities.

"We lead the world in deaths," Joe Biden said Thursday while accepting the nomination to be the Democratic party's candidate in the US presidential election. The country has seen 176,332 deaths out of 5.7 million infections.

He said he would implement a national plan to fight the pandemic on his first day in office if elected in November.

New daily US cases have been trending down for weeks -- but experts are unsure if Americans will have the discipline to bring the epidemic under control.

Latin American countries are counting the wider costs of the pandemic -- the region is not only suffering the most deaths, but also an expansion of criminal activity and rising poverty.

Without an effective political reaction, "at a regional level we can talk about a regression of up to 10 years in the levels of multidimensional poverty", Luis Felipe Lopez-Calva of the UN Development Programme told AFP.

But the WHO said the pandemic appeared to be stabilising in Brazil, and any reversal of its rampant spread in the vast country would be "a success for the world".