Atleast 22 killed and 59 others injured after a suicide bomber blew himself up at crowded arena Ariana Grande's pop concert in Manchester. 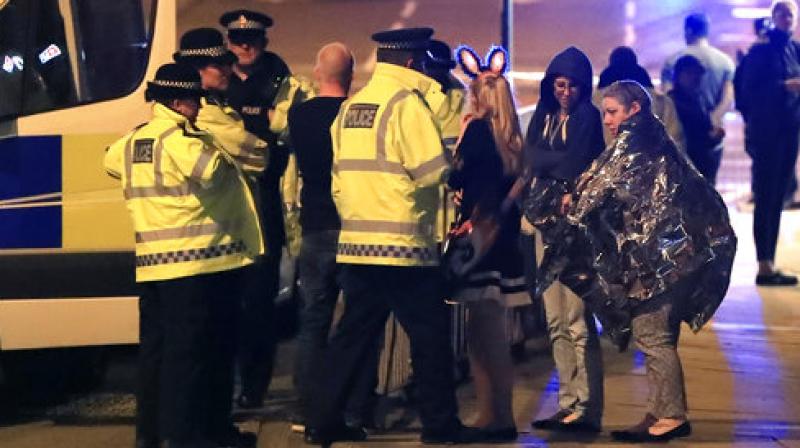 Emergency services personnel speak to people outside Manchester Arena after reports of an explosion at the venue during an Ariana Grande concert in England (Photo: AP)

London: The Indian High Commission in London on Tuesday set up a response unit and activated more helplines to assist any Indian nationals caught up in the Manchester terror attack that claimed 22 lives.

"We will activate more helplines to be of further assistance to families and friends of those affected by attack," the High Commission said in a statement on Twitter.

"Any Indians injured in Manchester attack on Monday may reach off-office hours of Public Response Unit of HCI (High Commission of India) ASAP at 0207632 3035," the statement said.

A suicide bomber blew himself up at a crowded arena hosting US star Ariana Grande's pop concert in Manchester, killing at least 22 people and injuring 59 others, the deadliest terror attack in the UK since the 7/7 bombings of 2005.

The lone attacker, carrying an improvised explosive device (IED), was also killed at the scene the pop concert at Manchester Arena.

"We have been treating this as a terrorist incident and we believe that while the attack last night was conducted by one man, the priority is to establish whether he was acting alone or as part of a network," said Chief Constable Ian Hopkins of Greater Manchester Police.

The Indian High Commission in London had on Monday organised a community-wide event to mark Anti-Terrorism Day, coinciding with former Prime Minister Rajiv Gandhi's death anniversary on May 21.

"The scourge of terrorism affects innocent lives not just in one country but across the globe. No country and no people should shelter terrorists, promote terrorists or appease terrorists," Indian High Commissioner to the UK Yashvardhan Kumar Sinha said at the event, during which he led an anti-terrorism pledge.