Eyewitnesses described a 'huge bomb-like bang' and scenes of panic as young fans fled the venue. 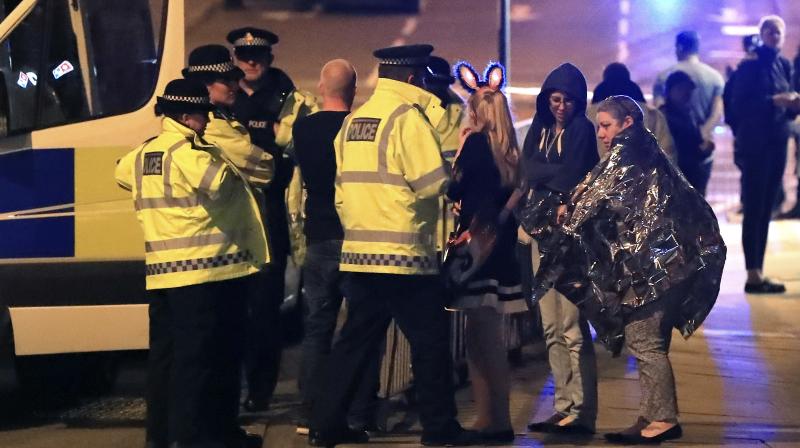 Emergency services personnel speak to people outside Manchester Arena after reports of an explosion at the venue during an Ariana Grande concert in Manchester, England. (Photo: AP)

Manchester: Nineteen people have been killed in a suspected explosion at the end of a pop concert by US star Ariana Grande in Manchester in northwest England that is being treated as a terrorist incident, police said.

Eyewitnesses described a 'huge bomb-like bang' and scenes of panic as young fans fled the venue. A fleet of ambulances were seen rushing to the venue and bomb disposal teams were dispatched soon after.

"So far 19 people have been confirmed dead, with around 50 others injured. This is currently being treated as a terrorist incident until we know otherwise," police said in a statement.

The first unconfirmed reports of an explosion emerged shortly after 2145 GMT on Monday.

Also read: Chronology of terror attacks on Britain since 2003

"We heard the last song go and then suddenly there was a massive flash and then a bang and smoke," said Gary Walker from Leeds to who was with his wife waiting for their daughters to come out told BBC Radio 5 Live.

Walker said he was hit by shrapnel in his foot while his wife sustained a stomach wound. Isabel Hodgins, who had been attending the concert, told Sky News: "Everybody was panicking, there was pushing up the stairs. The corridor was full, it smelled of burning. There was quite a lot of smoke as we were leaving. It's just shocking and we feel very shaken up. We're lucky to have gotten away safely," she said.

Majid Khan, 22, who was attending the concert with his sister, said: "A huge bomb-like bang went off that panicked everyone and we were all trying to flee the arena".

Calvin Welsford, 18, from Bristol told the BBC, "It almost sounded like a gunshot. I looked around and people were just spilling down, heading out of the building. I was actually having an asthma attack. It was sheer panic," he said.

Manchester residents opened up their homes to people left stranded by the incident, sending messages with the hashtag #RoomforManchester. Several media outlets reported that there had been two explosions from within the 21,000 capacity venue.

Robert Tempkin, 22, from Middlesbrough, told the BBC, "Everyone was screaming and running, there were coats and people's phones on the floor. People just dropped everything. Some people were screaming that they'd seen blood, but other people were saying it was balloons busting or a speaker had been popped."

"There were lots of ambulances. I saw somebody being treated. I couldn't tell what had happened to him," he added.

The Manchester ambulance service warned people only to call 'for life threatening emergencies' as it had 'a large number of resources at the incident'.

Suzy Mitchell, whose flat is opposite the venue said she heard 'a huge bang' and came outside to see 'everyone was running away in big crowds'.

Train services to and from Manchester Victoria Station -- located under the Arena -- had been cancelled.

"Disruption is expected to continue until the end of the day," National Rail said in a statement.

British Transport Police said in a statement, "Officers are at Manchester Arena following reports of an explosion within the foyer area of the stadium at 10.30pm this evening. The incident caused transport chaos, with traffic jams outside the venue."

"Emergency services are dealing with an incident near Manchester Victoria, resulting in all lines being closed," operator Northern Railway wrote on its website.