British mountaineer Mosedale believes the Step was most likely a victim of Nepal's 2015 earthquake. 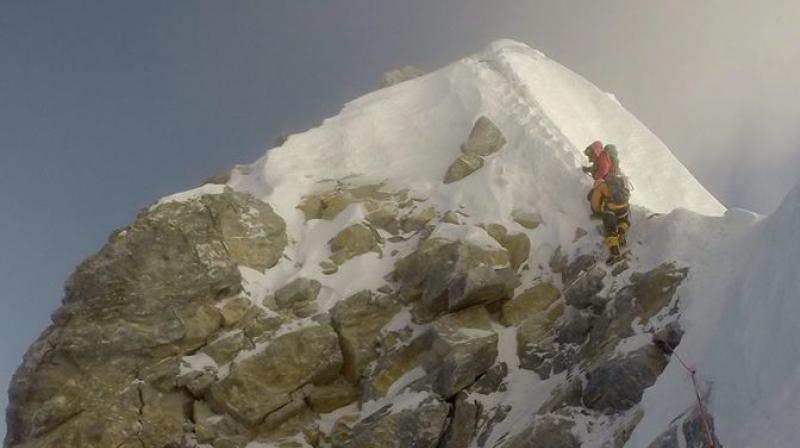 The near-vertical 12-metre rocky outcrop stood on the mountain's south-east ridge and was the last great challenge before the top. (Photo: Tim Mosedale/Twitter)

London: A famous feature of Mount Everest called 'The Hillary Step' has collapsed, potentially making the climb to the world's highest peak even more dangerous and time-consuming, mountaineers have confirmed.

The near-vertical 12-metre rocky outcrop stood on the mountain's south-east ridge and was the last great challenge before the top. The Hillary Step was named after Sir Edmund Hillary, who was the first to scale Mount Everest in 1953.

British mountaineer Tim Mosedale confirmed the news of the Step's demise on a Facebook post after reaching the summit on May 16, dubbing the loss as "the end of an era".

"It is associated with the history of Everest, and it is a great shame a piece of mountaineering folklore has disappeared," Mosedale said. "It was reported last year, and indeed I climbed it last year, but we weren't sure for certain that 'The Step' had gone because the area was blasted with snow," he wrote on Facebook.

"This year, however, I can report that the chunk of rock named 'The Hillary Step' is definitely not there anymore," he added. Mosedale believes the Step was most likely a victim of Nepal's 2015 earthquake, the 'BBC News' reported.

Mountaineers claim that the snow-covered slope will be much easier to climb than the notorious vertical rock-face, but loose rocks could also make it difficult and time-consuming.

This could create a bottleneck that causes mountaineers to wait at the bottom for hours, leading to life-threatening situations for those already battling low oxygen and frostbite conditions at the top of the world.