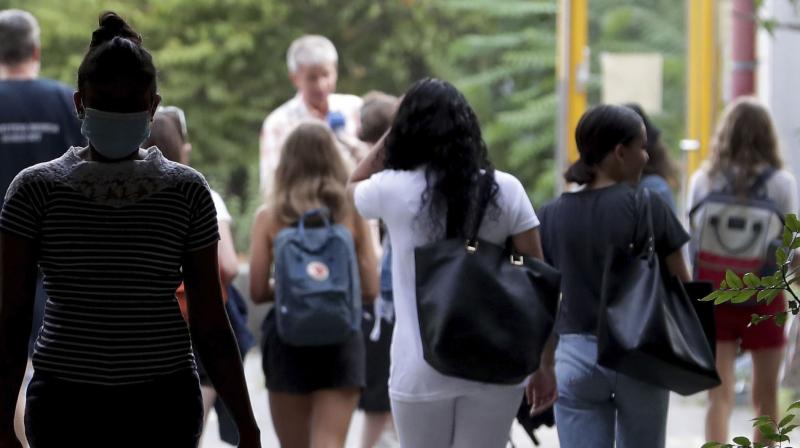 Students arrive at the 'Friedensburg Oberschule' school for the first day at school after the summer vacations during the new coronavirus outbreak in Berlin, Germany. (AP)

Berlin: At least 41 schools in Germany’s capital Berlin have reported that students or teachers have become infected with the coronavirus not even two weeks after schools reopened in the German capital.

Hundreds of students and teacher are in quarantine, the newspaper reported. Elementary schools, high schools and trade schools are all affected, the paper wrote. There are 825 schools in Berlin.

The reopening of schools and the possible risks of virus clusters building up in educational institutions and then spreading beyond to families and further into society have been a matter of great concern and it’s an issue that’s hotly debated in Germany.

Education in Germany isn’t in the hands of the federal government, but under the auspices of the country’s 16 states and thus there are many differing COVID-19 rules in place depending on each state, especially when it comes to wearing masks. While some states are still on summer vacation, others have been back to school for about two weeks.

Berlin was one of the first places in Germany to reopen its schools after the summer holidays. Children are obliged to wear masks in the hallways, during breaks and when they enter the classroom, but they can take the masks off once they sit in their places and classes begin. Some critics say the measures in Berlin are too relaxed and both students and teachers should wear masks during lessons as well.

Such is the case in the western state of North Rhine-Westphalia, Germany’s most populous, where about 2.5 million students went back to school a couple of days after Berlin. No exact figures about the number of schools with coronavirus infections were available from North Rhine-Westphalia, but several schools have also had to close classes there because of COVID-19 cases.

In general, Germany is determined to not send schools back into a lockdown as was the case in March, even as the infection rates go up again. Schools have been ordered to send single students or classes that had possible exposure into quarantine, but the goal is to avoid shutting down entire schools.

The German government has also said that keeping schools open is a top priority and more important than bringing fans back to sports stadiums or allowing big crowds to gather for concerts and other mass events.

Coronavirus case numbers in Germany have been going up again since late July. The reemergence of the virus in the country is driven by travelers returning home from abroad and people gathering for social events.

German Chancellor Angela Merkel expressed criticism Thursday that there are too many different regulations in place across the country, saying “people simply don’t understand” why they’re allowed to do one thing in Berlin that may be banned in Bavaria. However, plans underway to harmonize the different COVID-19 rules and come up with regulations that apply all over the country.

On Friday, Germany’s disease control center registered 1,426 new cases. That was below the 1,707 cases from Thursday, which was the highest number of new daily infections since late April. At the height of the pandemic in late April, Germany had around 6,000 new cases every day.

At least 230,048 people have been infected with the virus in Germany, 9,260 have died, according the the Robert Koch Institute.