I'm not afraid: fans in show of defiance after terror attacks in Barcelona

Several Barcelona fans held up a large black and white banner in the stands that read 'nothing will break us', a line from club's anthem. 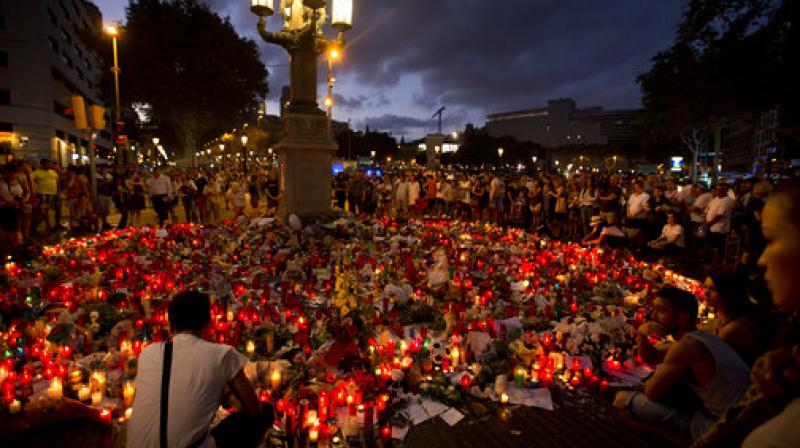 People stand next to candles and flowers placed on the ground, after a terror attack that killed at least 14 people and wounded over 120 in Barcelona, Spain. (Photo: AP)

Barcelona: Fans and players alike wore shirts blazoned with "Barcelona" on the back as they commemorated victims of the deadly Spain attacks as Barcelona kicked off their first game of the league season under tight security.

Flags at the 99,000 capacity Camp Nou stadium flew at half mast in honour of the 14 people killed in twin vehicle assaults as Barcelona hosted Real Betis.

Barcelona players wore black armbands in a sign of mourning and players from both sides observed a minute of silence before the start of the match.

As the minute's silence came to an end, the crowd broke into applause and chanted "No Tinc por", Catalan for "I'm not afraid". Barcelona stars including five-time World Player of the Year Lionel Messi wore shirts with 'Barcelona' replacing individual names on the back, which were selling briskly in the stadium's souvenir store.

"Normally I buy shirts without any name but this was the perfect moment to state out loud that we will continue to live here, that they don't scare us," said David Berruezo, 27, as he waited for his commemorative jersey at the shop.

Several Barcelona fans held up a large black and white banner in the stands that read "nothing will break us", a line from club's anthem. Ahead of the match Catalonia's regional police force said there would be additional officers on duty and warned fans to arrive early at the stadium and not to bring large bags.

With police still hunting a Morrocan man suspected of driving a van into pedestrians on Barcelona's Las Ramblas boulevard on Thursday, armed officers patrolled the streets around the stadium and checked cars.

"You still get a knot in your throat thinking about what happened, but watching Betis takes our fear," said Jose Fernandez, a 57-year-old bus driver who lives in Barcelona but supports Seville-based Betis.

Betis players wore shirts with the message "Real Betis with Barcelona" and before the match the club's officials laid a wreath of flowers on Las Ramblas.

Security jitters kept some fans at home as there were many empty seats in the stadium. "It seems like there are fewer people, that it is quieter than in other matches. It is also August and people are on holidays, but you notice it," said Teresa Serra, a 53-year-old nurse who came to the match with a friend.

After the attack some fans, especially tourists, returned their tickets, the club said without giving figures. "Their money was refunded to everyone, the circumstances are special and understandable," a club spokesman said. That was not the case of Maarten Demunster, a 44-year-old designer from Belgium who bought tickets for himself and his son two weeks ago.

"When I heard about the attacks I got scared. Maybe during two seconds I thought about not coming but it was just two seconds. That is what the people that do such horrible things want," said Demunster, who wore a Barcelona jersey.

Ian Bellamy, a 45-year-old sales director from Britain, was also defiant. "We had not planned to come, we just decided this morning as there were tickets available. Fear? No, after the attacks security is always stronger," he said.

At a small stand selling drinks just beside the stadium, Sandra Lorenzo, 41, said she was surprised. "I thought there would be like a collective hysteria but I see everything is normal. I have worked here for 25 years at every match. They are not going to make me stay at home," she said.