The state opening of parliament by Queen Elizabeth II came after a string of tragedies which have shaken the nation. 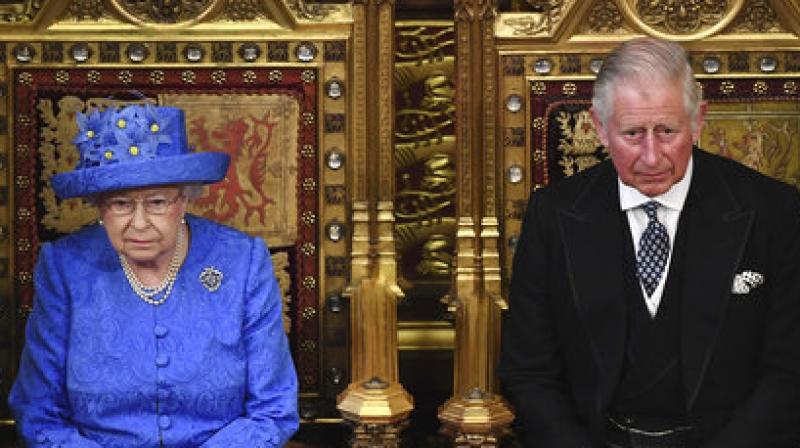 The queen, at an occasion shorn of its usual pageantry, read out the watered-down list of proposed legislation and lawmakers will then spend the next few days debating before bringing it to a vote. (Photo: AP)

London: Prime Minister Theresa May, leading a "zombie" government after a disastrous election, on Wednesday unveiled a diluted programme of action that included the mammoth legislation needed to take Britain out of the European Union.

The state opening of parliament by Queen Elizabeth II came after a string of tragedies which have shaken the nation, and the election on June 8 in which May's Conservatives saw their parliamentary majority wiped out.

The queen, at an occasion shorn of its usual pageantry, read out the watered-down list of proposed legislation and lawmakers will then spend the next few days debating before bringing it to a vote.

May could be forced to resign if she loses the vote, expected on June 29, just as the country embarks on highly sensitive negotiations for Britain's withdrawal from the European Union.

After four terror attacks and a deadly tower block blaze that have darkened the national mood, anti-government protesters are also planning a "Day of Rage" in the streets that will converge outside parliament with temperatures forecast to hit 34 degrees Celsius (93 degrees Fahrenheit) -- London's hottest June day since 1976.

The enfeebled premier, who is still locked in difficult talks with a Northern Irish party to prop up her administration, says the programme is about seizing opportunities offered by Brexit.

The queen said: "My government's priority is to secure the best possible deal as the country leaves the European Union."

She said her government would seek "to build the widest possible consensus on the country's future outside the European Union", amid divisions within May's own cabinet over the best strategy.

The speech announced no fewer than eight bills to implement Brexit, and new legislation aimed at tackling extremist content online after the terror attacks.

But the speech was notable also for what it did not contain. There was no mention of May's hugely controversial invitation to US President Donald Trump to come on a state visit.

Also absent were key pledges the Conservatives had given in their manifesto for the recent election which analysts said had bombed with the electorate -- such as reform of social care for the elderly and more shake-ups in schools.

There was also no mention of May's controversial promise to allow a parliamentary vote to repeal a ban on fox hunting, which angered left-wingers.

The Times branded May's administration the "stumbling husk of a zombie government" and said she was now "so weak that she cannot arbitrate between squabbling cabinet ministers".

"Downing Street is a vacuum," the newspaper said, two days after Britain and the EU formally started their Brexit negotiations.

Labour leader Jeremy Corbyn said he was ready to step in and build a rival government -- although he and other opposition parties lack the collective numbers to bring down May.

"This is an unstable coalition, it's not even a coalition, they haven't even got an agreement with the DUP (Democratic Unionist Party)," he said.

"We're ready to form, obviously, a minority government if this government collapses and it may well," Corbyn said, while raising the possibility of a fresh election if parliamentary deadlock continues.

May called the snap general election in a bid to strengthen her mandate heading into the Brexit talks.

But the plan spectacularly backfired, leaving her with a minority government that is now trying to form a majority with Northern Ireland's ultra-conservative DUP.

May has resisted calls to resign and is hoping for the support of the DUP's 10 MPs to boost her tally of 317 seats in the 650-seat parliament, but a deal has proved elusive so far.

A DUP source said a deal was "certainly not imminent" as the talks "haven't proceeded in a way that the DUP would have expected" and cautioned that the party "can't be taken for granted".

But even with DUP backing, the government would command only a tiny majority, and just a few rebel MPs could be enough to undermine it fatally.

The Queen's Speech, normally a chance for a new government to show off an ambitious programme, is usually a high point of British pomp, but this year there was no horse-drawn carriage procession, crown or ceremonial robes.

The snap election plus the closeness to the monarch's official birthday parade last weekend meant it was deemed infeasible to prepare a second major event at short notice.

The speech was initially planned for Monday but was postponed because of the turmoil following the election.

The government has said this session of parliament will last two years -- meaning there would be no Queen's Speech next year -- in order to be able to pass the vast amount of Brexit-related legislation.

But opposition parties have said it is a way for the government to avoid being voted down in a Queen's Speech next year, when talks in Brussels are expected to get tougher ahead of Britain's expected EU exit in March 2019.