Shamima Begum, who now wants to return home after giving birth in a refugee camp in Syria last weekend, said the order was “unjust”. 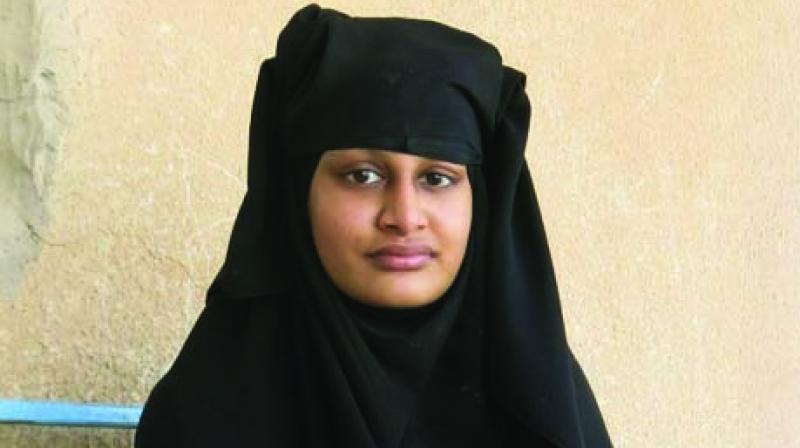 London: A British teenager who joined the Islamic State group in Syria in 2015 said on Wednesday she was shocked by a government decision to revoke her citizenship.

Shamima Begum, who now wants to return home after giving birth in a refugee camp in Syria last weekend, said the order was “unjust”.

“I am a bit shocked,” she told ITV News after learning of the move which was announced in a letter on Tuesday from Britain’s interior ministry to her mother in London.

“It’s a bit upsetting and frustrating. I feel like it’s a bit unjust on me and my son.” Begum’s fate has stirred controversy since she and two friends fled her east London home to join the terror network four years ago when she was aged just 15.

The case highlights a dilemma facing many European countries, divi-ded over whether to allow jihadists and IS sympathisers home to face prosecution or barring them over security concerns as the so-called “caliphate” crumbles. A spokeswoman for the interior ministry said on Tuesday it would not comment on individual cases, “but any decisions to deprive individuals of their citizenship are based on all available evidence and not taken lightly”.

She added that interior minister Sajid Javid was intent on prioritising “the safety and security of Britain and the people who live here”. “To protect UK, he has the power to deprive someone of their citizenship where it will not render them stateless.”

Begum gave birth to her third child at the weekend, and appealed to British authorities to show “compassion” by allowing her to raise the baby in Britain — while expressing no regret over having joined ISIS.    In the ministry's letter sent to Begum's mother, it said the teen had the right to appeal the order.

A lawyer for her family said it was disappointed with the move.

“(The) family are very disappointed with the... intention to have an order made depriving Shamima of her citizenship,” Tasnime Akunjee said on Twitter.