In a blow to her otherwise stellar career, the court rapped Lagarde for failing to contest a massive state payment to a tycoon. 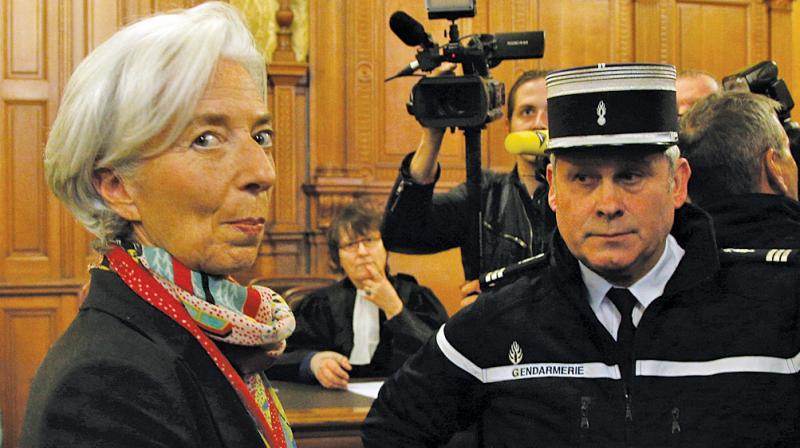 IMF chief Christine Lagarde arrives for her trial at a special court in Paris. (Photo: AP)

Paris: A French court on Monday found IMF head Christine Lagarde guilty of negligence over a massive state payout to a tycoon when she was French finance minister but spared her a fine or prison sentence.

The Court of Justice of the Republic found against Ms Lagarde over her handling of a dispute between the state and flamboyant businessman Bernard Tapie, which ended in a 404-million-euro ($422 million) award for Mr Tapie.

In a blow to her otherwise stellar career, the court rapped Ms Lagarde for failing to contest the massive payment.

Crucially, however, the Paris court said exempted her from any penalty.

It was not clear what impact the finding will have on her position at the International Monetary Fund, which has so far given Ms Lagarde its full backing.

The IMF board was to meet in Washington in the wake of the court’s decision.

The 60-year-old former corporate lawyer, who was the first ever female finance minister of a Group of Eight country before becoming IMF chief in 2011, was not in court for the ruling.

Her lawyer Patrick Maisonneuve told reporters she was in Washington. Mr Maisonneuve welcomed the absence of a punishment but said he “would have preferred that she be simply cleared”.

Ms Lagarde was put on trial over her 2007 decision to allow the dispute over Mr Tapie’s sale of the Adidas sports brand to the state-owned Credit Lyonnais bank to be resolved by a private arbitration panel, and then failing to challenge the result.

The court cleared her of negligence over her decision to refer the matter to arbitration but upheld the charge over her failure to contest the award.

Ms Lagarde told the court last week she had acted in good faith and that her sole aim had been “to defend the general interest”.

The Court of Justice of the Republic, which is staffed by judges and members of parliament, hears cases against ministers accused of wrongdoing in office.

The punishment for negligence theoretically carries a one-year prison sentence and a 15,000-euro fine. Ms Lagarde’s voice cracked with emotion on Friday as she said the trial had put her family — she is the mother of two sons — through a “testing” time.

Prosecutor Jean-Claude Marin had said he believed the evidence was “very weak” and was opposed to convicting Ms Lagarde.

The payout to Mr Tapie raised eyebrows, given his vocal support for Ms Lagarde’s then boss, ex-president Nicolas Sarkozy. It was subsequently cancelled by the courts.

Mr Tapie sold Adidas to Credit Lyonnais for the equivalent of 315.5 million euros in 1993. The bank sold it on the following year for 701 million euros, prompting claims from Mr Tapie that he had been cheated. Ms Lagarde told her trial she had trusted the advice of her subordinates in the process.

Another of her lawyers, Bernard Grelon, said her fault was “not one of negligence. It is having taken a decision which turned out badly”.