Parts of Europe limp back to normalcy as virus outbreak slows

Hard-hit Spain, where a nationwide lockdown has been extended, also said it would ease restrictions to allow children time outside 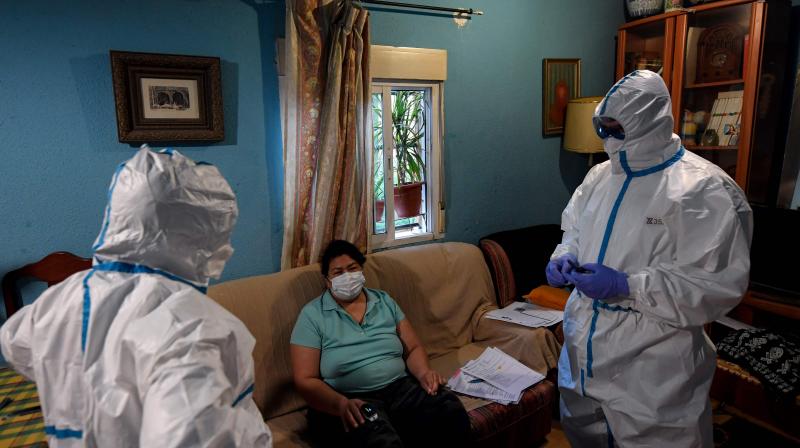 A healthcare worker of the Medical Emergency Services of Madrid (SUMMA 112) UVI-6 unit, wearing a protective suit, visits a suspected COVID-19 patient at her home in Madrid. AFP Photo

There were encouraging signs over the weekend in Europe with daily death tolls dropping in Italy, Spain, France and Britain.

In Germany, which been among the most successful in Europe to contain the disease and where authorities have declared it "under control", smaller shops in some regions were to re-open on Monday.

Larger shops and those in major German cities will open later as part of an attempted phased return to a more normal existence that will also see some students go back to school from May 4.

Adding another flicker of hope in Europe, Norway allowed children to go back to nurseries on Monday, although some parents expressed reservations over the decision.

Hard-hit Spain, where a nationwide lockdown has been extended, also said it would ease restrictions to allow children time outside.

Authorities are even starting to shut some makeshift facilities set up to relieve the overburdened health system, including a morgue at a Madrid ice rink.

France also said a nationwide lockdown in force for a month was beginning to bear fruit.

"We are scoring points against the epidemic," said French Prime Minister Edouard Philippe.

In the United States -- the country with the highest number of deaths and infections -- New York Governor Andrew Cuomo said the outbreak was "on the descent".

Cuomo cautioned that it was "no time to get cocky", although the warmer weather lured New Yorkers out of their homes and into parks over the weekend.

"I feel a little guilty being here, at the same time for my own mental sanity this is probably what I need," said real estate agent Taylor Henderson at Prospect Park in Brooklyn.

Across the other side of the world, New Zealand announced Monday that it will ease a nationwide lockdown next week, with Prime Minister Jacinda Ardern saying: "We have stopped a wave of devastation."

Iran, which has the Middle East's deadliest outbreak, also allowed some "low-risk" businesses to reopen Saturday.