Pope Francis led Good Friday services dedicated to the victims of human trafficking and the plight of migrants. 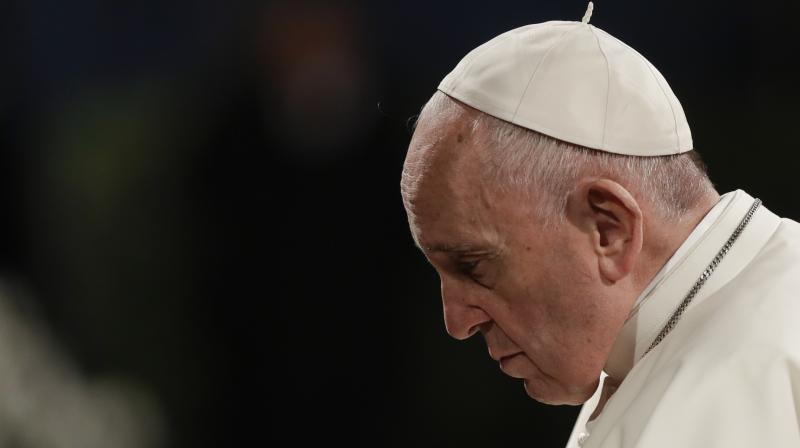 At the end of the service, Francis read a prayer in which he spoke of the poor, the hungry, the elderly, abused children and the environment. (Photo:AP)

Rome: Pope Francis led Good Friday services dedicated to the victims of human trafficking and the plight of migrants, denouncing leaders with "armoured hearts" who exploit their plight for political gain.

Francis, marking his seventh Easter season as Roman Catholic leader, presided at a traditional Via Crucis (Way of the Cross) service at Rome's Colosseum, attended by thousands of people holding candles.

The meditations read out by speakers during the 14 "stations of the cross" which commemorate the last hours of Jesus' life were written by Sister Eugenia Bonetti, an 80-year-old Italian nun who has won multiple awards for her work with trafficked women and children.

At the end of the service, Francis read a prayer in which he spoke of the poor, the hungry, the elderly, abused children and the environment.

In it, he spoke of "the cross of migrants who find doors closed because of fear and hearts that are armoured by political calculation".

Francis has made defence of migrants a key feature of his pontificate and has clashed over the immigration with politicians such as U.S. President Donald Trump and Italy's Interior Minister Matteo Salvini who leads the anti-immigrant League party and has closed Italy's ports to rescue ships operated by charities.

Each year, the pope entrusts the writing of the meditations to a different person or group. Bonetti's were among the most graphic and emotional ever read at the service.

Francis listened intently as three speakers read Bonetti's meditations about migrants being set on fire, dying in the desert or drowning at sea and ending up in nameless coffins.

"Let us think of all those children in various parts of the world who cannot go to school but are instead exploited in mines, fields and fisheries, bought and sold by human traffickers for organ harvesting, used and abused on our streets by many, including Christians ...,"

She wrote of seeing "men in luxury cars lined up to exploit" young woman forced into prostitution shortly after they arrive in Italy, where many African migrants wash up, hoping for a fresh start only to be snared by traffickers and pimps.

"Men, women and children are bought and sold like slaves by the new traders in human lives," she wrote "How many people are growing rich by devouring the flesh and blood of the poor?"

The 82-year-old leader of the world's 1.3 billion Roman Catholics will lead an Easter vigil service on Saturday night and on Easter Sunday will read the traditional "Urbi et Orbi" (To The City and The World) message.