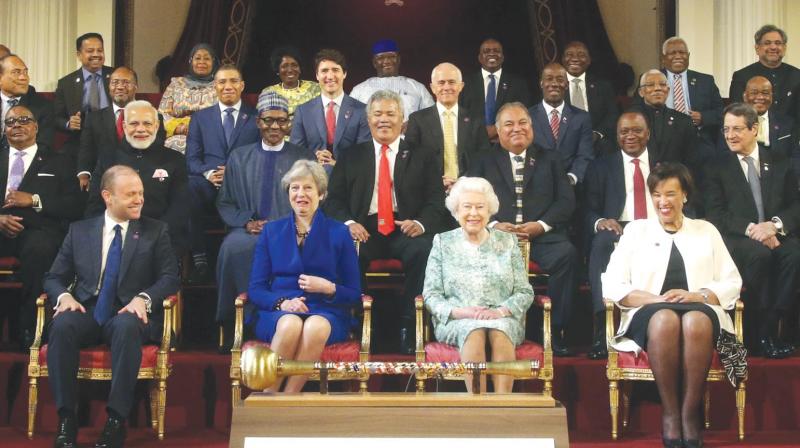 Commonwealth leaders, including Prime Minister Narendra Modi (second from left in second row), pose for a group photograph with Britain’s Queen Elizabeth II during the formal opening of the Commonwealth heads of government meeting in Buckingham Palace’s ballroom in London. (Photo: AP)

London: Prime Minister Narendra Modi on Thursday had a series of bilateral meetings and interactions, including with Australian Prime Minister Malcolm Turnbull, Bangladesh Prime Minister Sheikh Hasina and Seychelles President Danny Faure, on the sidelines of the multilateral Commonwealth Heads of Government Meeting (CHOGM) here even police continued its probe into an incident in which some groups protesting against atrocities in India turned violent after a tricolour was torn down from one of the official flagpoles.

“Strength in similar values of democracy, pluralism and Commonwealth traditions! PM @narendramodi met with Prime Minister of Australia Malcolm Turnbull on the sidelines of  and discussed issues of bilateral and multilateral cooperation,” ministry of external affairs spokesperson Raveesh Kumar tweeted.

Mr Modi also met his Bangladeshi counterpart, marking their first interaction since Ms Hasina’s visit to New Delhi last year and ahead of her proposed visit to India in the coming months.

“Neighbourhood first! Connecting with a neighbour and a close friend, PM Narendra Modi and Prime Minister of Bangladesh Sheikh Hasina had a productive exchange of views on various issues of bilateral interest on the sidelines of CHOGM 2018,” tweeted the MEA spokesperson.

The bilateral talks between Mr Faure and Mr Modi assume significance after Seychelles ordered an inquiry into the leak of a highly classified agreement signed with India to develop infrastructure on Assumption Island, which lies southwest of the mainland of Mahe.

The Opposition in Seychelles has decided not to ratify the pact because of Assumption’s relative proximity to Aldabra atoll, a Unesco World Heritage Site that is home to the world’s largest population of giant tortoises.

Officials had earlier indicated that no meeting has been requested or scheduled with Pakistan Prime Minister Shahid Khaqan Abbasi and later confirmed there was no interaction between the two. The bilateral talks took place as the formal heads of government meeting got underway in London on Thursday, following a formal launch by Queen Elizabeth II at Buckingham Palace.

Earlier, some protesters at Parliament Square on Wednesday turned aggressive after the Indian tricolour was torn down from an official flagpole.

“Police are investigating after an Indian flag in Parliament Square was pulled down at on Wednesday. The flag has been replaced. There have been no arrests. Enquiries continue,” a Metropolitan Police statement said.

A UK Foreign and Commonwealth Office (FCO) spokesperson said, “While people have the right to hold peaceful protests, we are disappointed with the action taken by a small minority in Parliament Square and contacted high commissioner Yashvardhan Kumar Sinha as soon as we were made aware.”

“The visit to the UK by Prime Minister Modi has strengthened our relationship with India and we look forward to working even more closely together on a number of important areas,” the spokesperson said. On Thursday, PM Modi also met his Mauritius counterpart Pravind Kumar Jugnauth and talked about cooperation in trade and investment, maritime cooperation and people-to-people ties.