Man who smuggled 8-yr-old son into Spain, goes for trial

Prosecutors are seeking a 3-yr prison term for Ali Ouattara for helping his son's illegal entry into Europe and endangering child's life. 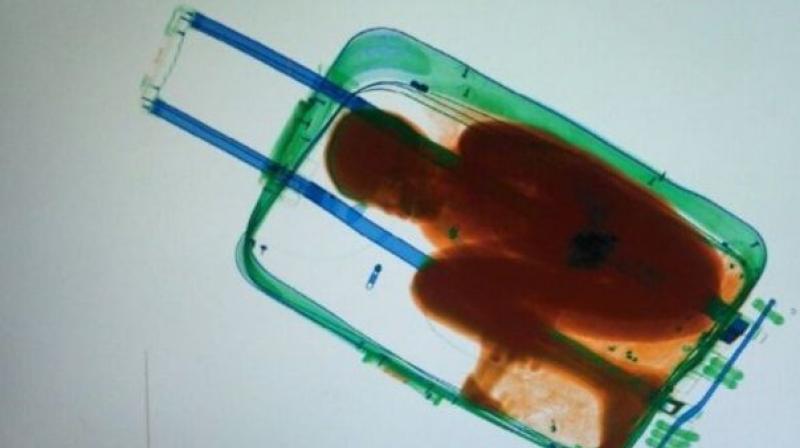 On May 7, 2015, Spanish police noticed a young Moroccan woman dragging what looked like a heavy suitcase across the border with Ceuta. When they put the suitcase through an X-ray machine they were shocked to see the silhouette of a child curled up in foetal position. (Photo: AFP)

Ceuta, Spain:  The heart-rending photo went round the world in 2015, showing an eight-year-old boy from Ivory Coast crammed into a suitcase that was found at a Spanish border crossing.

His father goes on trial on Tuesday in Ceuta, a Spanish overseas territory in northern Morocco which migrants from Africa regularly try to reach by scaling high border fences, hiding behind car dashboards or in bus chassis.

Prosecutors are seeking a three-year prison term for Ali Ouattara for facilitating his son's illegal entry into Europe and endangering the child's life.

"I'm going to this trial with a lot of confidence because I'm not a human trafficker," Ouattara, 45, told AFP.

On May 7, 2015, Spanish police noticed a young Moroccan woman dragging what looked like a heavy suitcase across the border with Ceuta.

When they put the suitcase through an X-ray machine they were shocked to see the silhouette of a child curled up in foetal position.

"My name is Adou," the boy told them in French after they extricated him from the suitcase, according to Spanish journalist Nicolas Castellano, who wrote a book about the story.

The desperate smuggling attempt was a first in Ceuta.

But only three months later, a 27-year-old Moroccan died of asphyxiation inside a suitcase placed in the trunk of a car on a ferry linking Melilla, another Spanish territory in Morocco, to southern Spain.

Adou was soon reunited with his mother, and his father, who had been waiting for his son on the Spanish side of the border, was arrested shortly after the police discovery.

Ouattara said he was "misled" by the traffickers who charged him 5,000 euros (USD 6,200) and did not tell him his son would be hidden in a suitcase.

The traffickers had initially promised to fly the boy from the Ivorian economic capital Abidjan to Madrid but then told him they would instead travel via Ceuta by car, he said.

"For us, it was crucial for the child to come, we couldn't live without him, we couldn't stop thinking about him," Ouattara said.

A former philosophy and French teacher in Abidjan, Ouattara arrived illegally in Spain in 2006, making the perilous journey across the Mediterranean aboard a boat.

He eventually got a stable job and home in the Canary Islands, and was able to bring his wife and daughter over legally.

But Spanish authorities refused four times to let him bring over his son too.

"I was earning more than 1,300 euros in a launderette but they said it wasn't enough" for the entire family to live, he says.

His wife, daughter and Adou are now living in France, but Ali is still in Spain as he is barred from leaving the country pending the trial.

Adou is expected to return to Ceuta for the trial.