The total fatalities in Spain, the third hardest-hit country in the world after the US and Italy, have reached 20,453 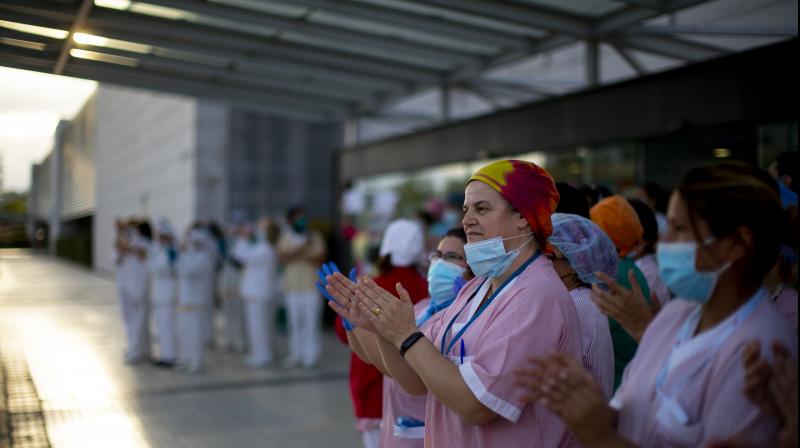 Health workers applaud in support of the medical staff that are working on the COVID-19 virus outbreak at the Puerta de Hierro hospital in Majadahonda, Spain. AP Photo

Madrid: Spain registered Sunday a sharp drop in the daily death toll from coronavirus, with the number falling to 410 from 565.

The total fatalities in Spain, the third hardest-hit country in the world after the US and Italy, have reached 20,453, the health ministry said. Infections rose to 195,344, with 4,218 new cases in the past 24 hours.

However, Fernando Simon, the health ministry's emergencies coordinator, said the fall in the number of deaths from Saturday to Sunday can be explained by the lower registration of fatalities over the weekend. Such a drop is often followed by a rise at the start of the week.

Spanish authorities believe the country reached the peak of the pandemic on April 2 when they had counted 950 deaths in 24 hours. But they are not ready to recommend a lifting of the nationwide lockdown, one of the tightest in Europe.

Prime Minister Pedro Sanchez on Saturday announced he would ask parliament to extend the lockdown by two weeks to May 9.

The restrictions currently in place would however be loosened slightly to allow children time outside from April 27, Sanchez said.