The Moscow city traffic authority identified the driver as 28-year-old Chyngyz Anarbek, who is from Kyrgyzstan. 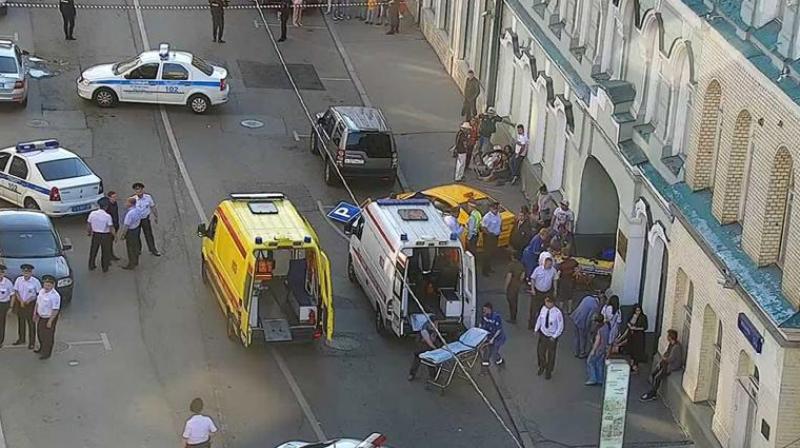 In the recording, the driver says he briefly dozed off and accidentally hit the gas. It was unclear whether the man spoke under duress. (Photo: AP)

Moscow: The suspect in a taxi crash near Red Square that injured two Mexican soccer fans and six other pedestrians as Russia hosts the World Cup told interrogators he fell asleep at the wheel, Moscow city police said Sunday.

The police released a video of an interrogation session with a man the Moscow force identified as the taxi driver. In the recording, he says he briefly dozed off and accidentally hit the gas. It was unclear whether the man spoke under duress.

The man in the video says he hadn't slept in 20 hours and wasn't drunk, and ran away after the accident because he was afraid that angry bystanders would kill him. He was later detained.

The Moscow city traffic authority identified the driver as 28-year-old Chyngyz Anarbek, who is from Kyrgyzstan.

Speaking to AP, from the town of Muras Ordo in Kyrgyzstan, Anarbek's older brother said only had been working as a taxi driver for a month. He said his sibling was in "stress, shock, horror" after what happened.

"Let people say what they want, but my brother is clean, not guilty. He was never and could never be a terrorist," Almazbek Anarbek said.

The younger Anarbek won a bronze medal last year in the world championship of Pankration, an ancient sport combining skills of boxing and wrestling.

Videos circulating on Russian social media and some news websites after the incident showed the taxi veering onto the sidewalk Saturday and striking pedestrians. The accident took place on Ilinka Street, about 200 meters (650 feet) from Red Square and Moscow's famous GUM shopping arcade, an area popular with tourists.

Viktoria Geranovich, who works nearby and filmed the fleeing driver on her phone, described her shock.

"I called the ambulance right away," she told AP. "I was trembling. It is not a thing you see every day, when a taxi drives right into the crowd."

Moscow police would not comment on whether the crash would affect security measures for soccer's World Cup, which is being held in 11 Russian cities over the next month. Among the security concerns has been the possible use of vehicles as weapons.

Russia has also been working with law enforcement from other countries to secure the tournament.

"The sense we are getting is that (the taxi crash) is not football-related," Mark Roberts, head of U.K. soccer policing, told the AP. "At the moment, everything we are being told is that it was just a run-of-the-mill event."

A spokeswoman for FIFA said that World Cup organizers regretted what happened, but referred security questions to Moscow authorities because the crash took place outside stadiums or fan venues.

The spokeswoman, who was not authorized to be publicly named, said World Cup organizers were in regular contact with local authorities on security.

The Mexican Embassy said the two injured female fans met with embassy representatives and were not hospitalized. The Mexican national soccer team plays against Germany on Sunday in Moscow.

The head of the Moscow health department, Alexei Khripun, was quoted by the RIA Novosti news agency as saying the other injured people were in satisfactory condition. Three Russians remained hospitalized Sunday, but were expected to be discharged in coming days, Khripun said.

International soccer fans in Moscow shared information about the crash, but didn't appear to let it dampen their enthusiasm.

"It is pretty horrible that something like that has happened," said Mexican supporter Julio Domingues. But, he added, "There are crazy people everywhere."

Fellow fan Fernando Ibarra said: "We hope our countrymen are OK! Big hug to the families too. Viva Mexico!"