Alarm as another German slaughterhouse hit by coronavirus outbreak 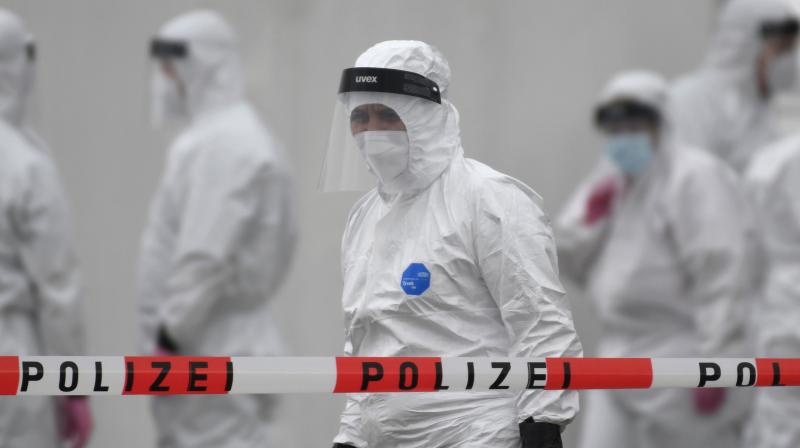 Members of a coronavirus testing station stand on the factory premises of the Westfleisch meat processing company in Hamm, western Germany. (AFP)

Frankfurt: Germany has uncovered another cluster of coronavirus infections at a slaughterhouse, fuelling alarm about working conditions in the country's meat packing plants.

A total of 92 employees at the Westfleisch slaughterhouse in Lower Saxony state have tested positive, local authorities in Osnabrueck district announced late Sunday.

The plant has been closed until further notice and staff have been placed in quarantine, joining a string of German slaughterhouses that have suffered similar outbreaks.

Many of the cases have been among abattoir workers from eastern Europe who live in shared accommodation.

Germany has grown increasingly concerned about the meat industry as a hotbed of new coronavirus infections, just as the nation emerges from lockdown and attempts to restart its battered economy.

Two similar outbreaks have occurred in France as well.

A large outbreak at a slaughterhouse in the district of Coesfeld in western Germany earlier this month prompted authorities to embark on mass testing at meat processing sites across the country.

More than 260 cases have now been confirmed at the Coesfeld plant.

Another abattoir in the state of Schleswig-Holstein has reported over 100 cases, while one in Bavaria has had around 60.

Government ministers are set to discuss the slaughterhouse clusters on Monday, with Labour Minister Hubertus Heil expected to call for stricter oversight of working conditions.

It is particularly critical of the meat industry's widespread practice of subcontracting workers "from shady low-cost companies" which the union said allows German firms "to outsource responsibility" for the workers.

But slaughterhouses aren't the only cause for concern.

A refugee home in St. Augustin, near Bonn, has also been hit hard by COVID-19. More than 100 of its 500 residents have tested positive so far, local officials said Sunday.

Germany has recorded a total of 174,697 coronavirus cases since the start of the pandemic, the Robert Koch Institute for disease control said Monday.

Just over 7,900 people have died, a far lower fatality rate than in other European countries.