Twenty-nine German tourists were killed when their bus spun off the road and tumbled down a slope before crashing on Madeira island. 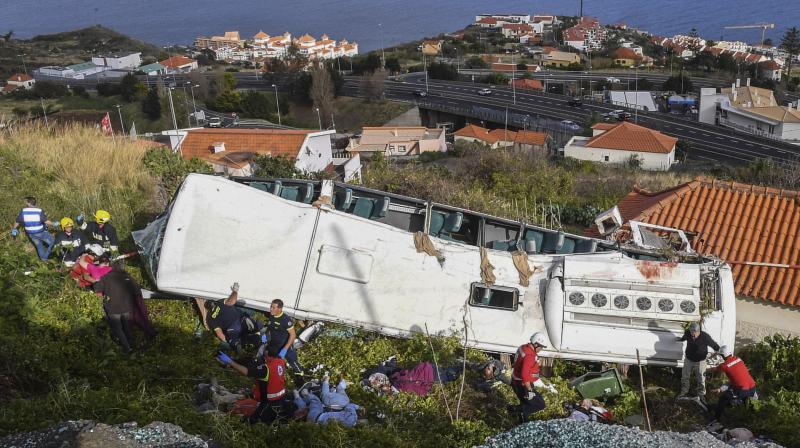 Drone footage of the aftermath of the accident showed the badly mangled wreckage of the bus resting precariously on its side. (Photo:AP)

Lisbon: Twenty-nine German tourists were killed when their bus spun off the road and tumbled down a slope before crashing into a house on the Portuguese island of Madeira.

Drone footage of the aftermath of the accident showed the badly mangled wreckage of the bus resting precariously on its side against a building on a hillside, the vehicle's roof partially crushed and front window smashed.

Rescue workers attended to injured passengers among the undergrowth where the bus came to rest, some of them bearing bloodied head bandages and bloodstained clothes, others appearing to be more seriously hurt.

Local authorities said most of the dead were in their 40s and 50s.

They were among the more than one million tourists who visit the Atlantic islands off the coast of Morocco each year, attracted by its subtropical climate and rugged volcanic terrain.

"Horrible news comes to us from Madeira," a German government spokesman tweeted after the crash.

"Our deep sorrow goes to all those who lost their lives in the bus accident, our thoughts are with the injured," he added.

German holidaymakers were the second largest group after British tourists to visit the islands -- known as the Pearl of the Atlantic and the Floating Garden in the Atlantic -- in 2017, according to Madeira's tourism office.

Filipe Sousa, mayor of Santa Cruz where the accident happened, said 17 women and 11 men were killed in the crash, with another 21 injured.

A doctor told reporters another woman died of her injuries in hospital.

"I express the sorrow and solidarity of all the Portuguese people in this tragic moment, and especially for the families of the victims who I have been told were all German," President Marcelo Rebelo de Sousa told Portuguese television.

He said he would travel to Madeira overnight.

"It is with profound sadness that I heard of the accident on Madeira," he wrote on the government's Twitter page.

"I took the occasion to convey my sadness to Chancellor Angela Merkel at this difficult time," he added.

The regional protection service in Madeira confirmed 28 deaths in the accident that happened at 6:30 pm (1730 GMT) Wednesday, while hospital authorities said another woman later died of her injuries.

The bus had been carrying around 50 passengers.

Regional government Vice President Pedro Calado said it was "premature" to speculate on the cause of the crash, adding that the vehicle was five years old and that "everything had apparently been going well".

Judicial authorities had opened an investigation into the circumstances of the accident, the Madeira public prosecutor's office told the Lusa news agency.

Medical teams were being sent from Lisbon to help local staff carry out post-mortems on the dead.