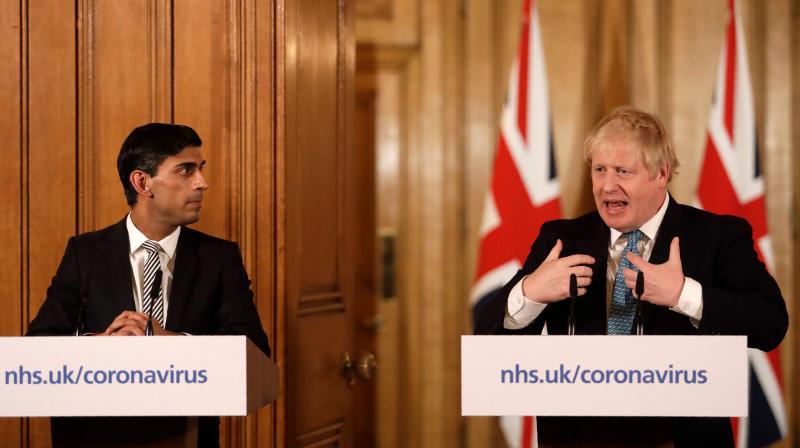 The Chancellor of the Exchequer joined British Prime Minister Boris Johnson during his daily briefing from 10 Downing Street in London to announce that he is making available 330 billion pounds of loan guarantees to businesses to help them meet their day to day needs amid the ongoing near-lockdown.

"The coronavirus pandemic is a global health emergency but it is also an economic emergency. We have never in peacetime faced an economic fight like this one," said Sunak, who acknowledged that people's anxiety about the disease is matched by their anxiety about their livelihoods and therefore "unimaginable" level of intervention is required.

"This is not a time for ideology or orthodoxy. This is a time to be bold. A time for courage," he said, adding that he will do "whatever it takes" to support people's jobs and incomes.

As part of his bailout package, Sunak extended a business rates holiday to all businesses in the retail and hospitality sector for 12 months as well as a cash grant to help them survive and said any business that needs help will be able to access a loan on attractive terms.

An agreed facility with the Bank of England will help support liquidity amongst larger firms and for smaller firms, the business interruption loan scheme will be extended to offer loans of up to 5 million pounds.

Mortgage lenders will give a three-month mortgage holiday to people who need help and there will also be special help for airlines, hit particularly hard as a result of travel restrictions around the world.

"Yes this enemy can be deadly, but it is also beatable  and we know how to beat it and we know that if as a country we follow the scientific advice that is now being given we know that we will beat it," Johnson said, as he reiterated Monday's advice for everyone to avoid unnecessary social contact and travel.

"We must act like any wartime government and do whatever it takes to support our economy," he said.

The near-lockdown in place across the UK to tackle the spread of COVID-19, which has claimed 55 lives in the UK, has threatened the closure of large numbers of businesses in the country, including pubs, bars and restaurants.

The new financial package announced by Sunak builds on the 12 billion pounds he had set out last week in his first Budget in the House of Commons, when he suspended business rates for many firms in England, put in an emergency temporary loan facility in place, extended statutory sick pay for workers, set up a "hardship fund" for local authorities and boosted NHS funding.

Johnson said: "As time goes on we will learn more and more about the disease and the effects of our actions. And while we need national unity, we also need international cooperation. And although we now need to impose physical distance between ourselves, we must at the same time have closer social support for each other."

It follows draconian measures he had announced on Monday which calls on people not to go out, even to buy food or essentials, other than for exercise and in that case at a safe distance from others.

Advice on avoiding all social contact is "particularly important" for those aged over 70, pregnant women and those with other underlying health conditions, Johnson said.

People have been advised to start working from home "where they possibly can" and "avoid pubs, clubs, theatres and other such social venues".

It triggered a string of event cancellations across the board, including West End plays, sporting fixtures and the annual UK Asian Film Festival which was due to begin next week.

"We are in a war against an invisible killer," UK health secretary Matt Hancock said, adding that emergency legislation to tackle the virus would be introduced in Parliament on Thursday.

The total number of people in the UK to test positive for the virus has risen by 171 in a day to hit a total of 1,543. London is facing the brunt of the crisis and is said to be nearing the peak faster than other parts of the country, with the number of cases set to rise dramatically within days.

"It looks like we're on the fast upswing or just about to get there and that's the reason to want to get in quite quickly with these measures," said Sir Patrick Vallance, the UK government's Chief Scientific Adviser.

Measures would be escalated once again in the coming days, when those with underlying health problems would be told to isolate themselves for three months.

The UK government says it wants to ensure that the period of maximum protection coincides with the peak of the epidemic.