'A possible terrorist motive is part of the investigation,' Utrecht police said on Twitter. 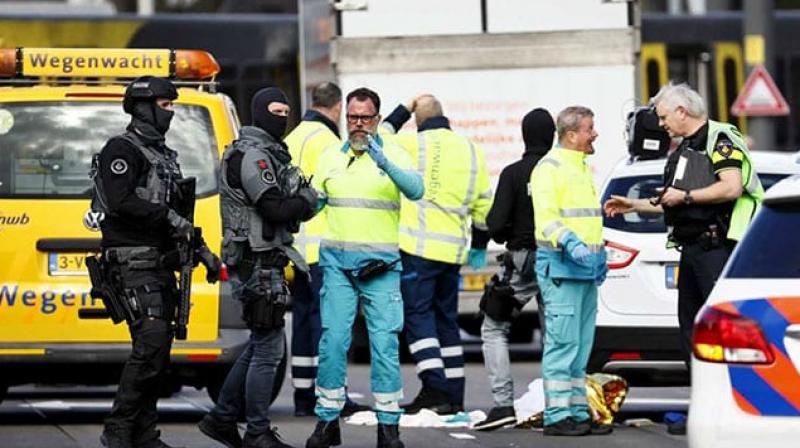 Armed police and emergency vehicles surrounding a tram that had stopped near a road bridge. (Photo: AFP)

The Hague: A gunman opened fire on a tram in the Dutch city of Utrecht on Monday, killing at least three people and wounding several in what officials said was a possible terrorist incident.

Dutch Prime Minister Mark Rutte said people may have died in a shooting in the city of Utrecht being treated as a possible terror attack, adding that the Netherlands would "never give way to intolerance".

Rutte told a brief press conference in The Hague with the country's justice minister that there were "several wounded and possible deaths" in the incident. Photographs had earlier shown one body lying under a sheet at the scene.

A body covered in a sheet was reportedly seen on the tracks as armed police and emergency services swarmed around the scene in one of the largest cities in the Netherlands. Police said the attacker was still on the run after the incident. "A shooting occurred on the 24 Oktoberplein in Utrecht... Multiple people have been injured.

The surrounding area has been cordoned off and we are investigating the matter," Utrecht police said on Twitter. "It is a shooting incident in a tram. Several trauma helicopters have been deployed to provide help." Dutch Prime Minister Mark Rutte cancelled a meeting with his ruling coalition and was being briefed on the situation, officials said. Police later said that "a possible terrorist motive is part of the investigation".

The head of the Dutch national counter-terrorism service, Pieter-Jaap Aalbersberg, said on Twitter that he was having "crisis consultations" over the incident.

"NCTV is monitoring the situation in #Utrecht. In close contact with local authorities. We cannot rule out terrorist motive. Crisis team is activated," he said.

A shooting occurred on the #24oktoberplein in #Utrecht. The incident has been reported at 10.45 hour. Multiple people have been injured. The surrounding area has been cordoned off and we are investigating the matter.

"Offender still fugitive," Aalbersberg said, adding that the terror threat level had been raised to the maximum of five in Utrecht for the next 18 hours. Local media showed photographs of masked, armed police and emergency vehicles surrounding a tram that had stopped near a road bridge.

Tram traffic in the area was halted, operator Qbuzz was quoted as saying by the ANP news agency. The Netherlands has been largely spared the kind of attacks which have rocked its closest European neighbours in the past few years, but there has been a series of recent scares.

In August, a 19-year-old Afghan with a German residence permit stabbed and injured two American tourists at Amsterdam's busy Central Station before being shot and wounded. In September, Dutch investigators said they had arrested seven people and foiled a "major attack" on civilians at a major event in the Netherlands.

They said they had found a large quantity of bomb-making materials including fertiliser likely to be used in a car bomb. The men were arrested in the cities of Arnhem and Weert.

In June, two terror suspects were arrested while close to carrying out attacks including at an iconic bridge in Rotterdam and in France, prosecutors said. The men aged 22 and 28, who were of Moroccan origin, made a film at the Erasmus bridge in which they sang a martyrdom song, they said.