The race is part ultra-marathon, part tribute to those who died trying to cross the Wall, which was erected in 1961. 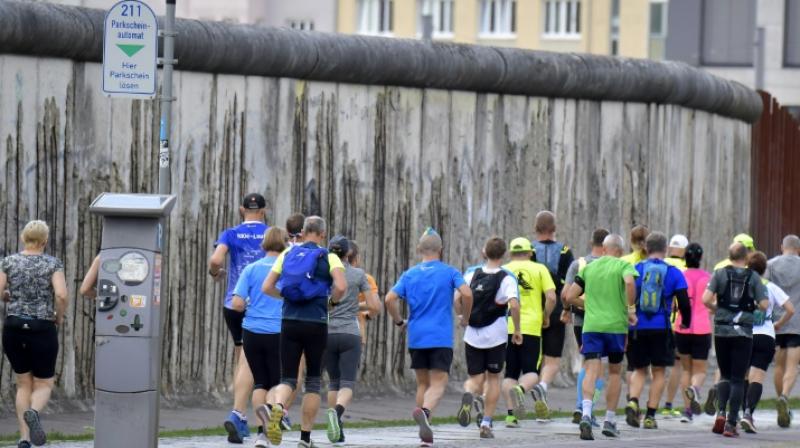 The mammoth race is not for the faint-hearted: it is effectively four marathons back-to-back. (Photo: AFP)

Berlin: Where guard towers and barbed wire once stood, runners will this weekend pound the 100-mile (160 kilometres) path along the former Berlin Wall in a race with victims of the Cold War relic at its heart.

On Saturday at 6:00 am (0400 GMT), around 500 individual runners from 32 countries, plus double that in relay teams, will start the 8th edition of the Berlin Wall Race, ahead of the 30th anniversary of the Wall's demise this November.

The race is part ultra-marathon, part tribute to those who died trying to cross the Wall, which the East German communist regime hastily erected in 1961, and stood for 28 years.

Precious little of the original concrete structure remains, most of it hurriedly torn down when the former East German state collapsed in late 1989.

The longest single section is the kilometre-long East Side Gallery, where the former symbol of oppression is now covered in art, a popular backdrop for tourists posing for selfies.

What was once a heavily-fortified border strip that encircled West Berlin, patrolled by guards under shoot-to-kill orders, was in 2006 turned into the 'Mauerweg' or Berlin Wall path.

It passes iconic landmarks the Brandenburg Gate and Checkpoint Charlie but also crosses through leafy suburbs, farmland and forests.

Along the route, popular with weekend hikers and cyclists, memorials tell the personal stories of many of the around 130 people killed along the Wall.

"When you move around Berlin now, you hardly see any of the Wall left, but when you run the path and see its scale, you have a better understanding of the divide it caused," said race organiser Olaf Ilk, who was born in East Germany and was 24 when the Wall fell.

The mammoth race is not for the faint-hearted: it is effectively four marathons back-to-back.

"The physical challenge is one thing, the other is for the head," added Ilk.

With heavy legs, most runners will jog through Saturday night, aiming to reach the city centre stadium which doubles as both start and finish, in the early hours of Sunday.

Elite athletes will run the whole way with hobby runners out to beat the 30-hours time limit.

"You have to accept that you will be moving for 24 hours," says west Berlin runner Nina Blisse, who finished both the 2014 and 2015 editions in under 26 hours and is race treasurer.

The Wall's history is entwined in the race's DNA.

Registration for the following year's race always opens at 18:57 (1657 GMT) on November 9 — marking the exact moment in 1989 when East Germany lifted its travel ban, triggering the Wall's demise.

Each year, one Wall victim is chosen for a special tribute, their face featuring on start numbers and finisher medals, while a ceremony is held at the spot where they died.

For the first race in 2011, Chris Gueffroy, the last person shot dead on the Berlin Wall, was honoured.

He was killed in February 1989, eight months before the Wall fell, and on Sunday, Gueffroy's mother Karin will present medals at the finishers' ceremony.

Last year, the Wall's youngest victim, Joerg Hartmann, a 10-year-old boy shot dead by East German border guards in 1966 while trying to visit his father in the west, was honoured.

Having each been asked to carry a gift for him, last year's runners piled cuddly toys at the spot he was killed.

"I still get goosebumps thinking about it," admits Ilk.

For the organisers and 400 helpers, all volunteers, a sleepless night is par for the course.

Logistics co-ordinator Andreas Pfeiffer must ensure half a tonne of provisions reach each of the 26 stations along the route.

He first got involved because of his personal Cold War story.

Raised in East Germany, Pfeiffer spent two years in prison up until 1984 after being arrested trying to flee across the Iron Curtain at the Hungary-Austria border.

He was freed in West Germany — one of 33,755 political prisoners released for 3.5 billion Deutschmarks by East Germany under a scheme between 1963 and 1989, according to government figures.

"I was never a runner, but when I first heard about the race, I had to get involved," he said.

"For me, democracy is everything — those two years in prison were worth five years of freedom in the west.

"I still get goosebumps every time I cross the old border between East and West Germany — that'll never go away."