No dinner for Theresa May at European Union summit 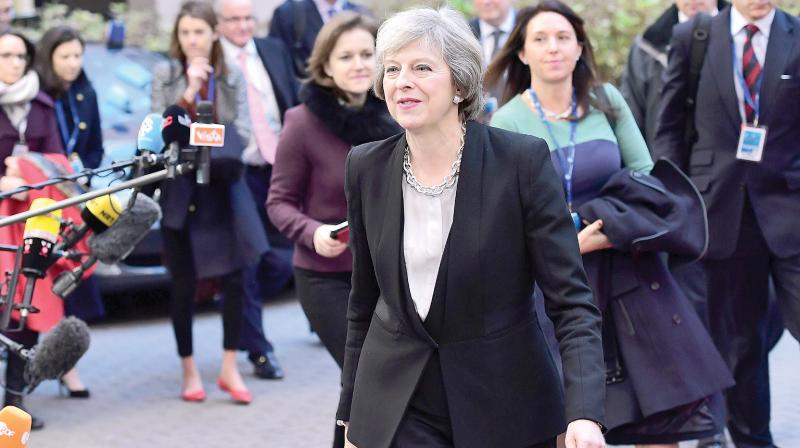 British Prime Minister Theresa May arrives for the European Union leaders’ summit at the European Council in Brussels. (Photo: AFP)

Brussels: European Union leaders grappled with Russia and Brexit at a “minefield” summit in Brussels on Thursday at the end of one of the most turbulent years in the bloc’s history.

The 28 leaders are dealing with the migration crisis, sanctions against Moscow over the wars in Ukraine and Syria, and a troublesome pact with Kiev that the Netherlands threatens to veto.

British Prime Minister Theresa May will later be left out in the cold while the other 27 have dinner without her in a bid to present a united front over how they handle Britain’s departure.

Ms May however dismissed any suggestion that it amounted to a snub and called for as “smooth and orderly a process as possible”.

“It is right that the other leaders prepare for those negotiations as we have been preparing,” said Ms May, who has promised to trigger the two-year divorce process by the end of March.

Lithuania’s “iron lady” President Dalia Grybauskaite meanwhile played down a report that Britain’s ambassador to the EU had warned the government that a full post-Brexit trade deal could take 10 years.

“10 years? I hope it will be a lot less,” she told reporters. The one-day summit, cut back from the usual two days. “We are treading on a minefield, there are so many issues on the agenda that still can go wrong,” warned a senior EU official.

The British government also rejected a report Thursday that it could take up to 10 years to agree a new trade deal with the EU after Brexit, a move that could leave businesses in limbo.

Ms May’s spokesman insisted that Britain could negotiate its departure from the European Union and a new trading arrangement within the current two-year timeframe.

Britain’s ambassador to the EU, Ivan Rogers, has advised ministers that the other 27 member states believe a trade deal might not be done until the early to mid-2020s, the BBC reported.

In a meeting in October, Mr Rogers also warned that even once it was agreed, the new deal might be rejected as each EU country’s parliament would have to ratify it.

“This is the ambassador reflecting the views of others which have been put to him, which is a role that all ambassadors carry out.”

Ms May has said she will trigger Article 50 of the EU’s Lisbon treaty, giving formal notification of Britain’s intention to leave the bloc, by the end of March.

This begins a two-year countdown after which Britain will leave all the institutions and the single market, unless alternative arrangements have been agreed.

“The intention is that we will have a deal within the timeframe we’ve set out which sees us exit the European Union and allows us to trade with and operate in the single European market,” Ms May’s spokesman said.

But two senior ministers this week indicated they might be open to agreeing some kind of transitional deal, to bridge the gap between Brexit and the completion of new trade arrangements.

Chancellor Philip Hammond, the finance minister, said on Monday that there was an “emerging view” that such an arrangement would be “helpful” to smooth the transition.

Brexit minister David Davis on Wednesday said a bridging deal could be struck “if necessary” — although he said he still believed negotiations could be wrapped up in two years.