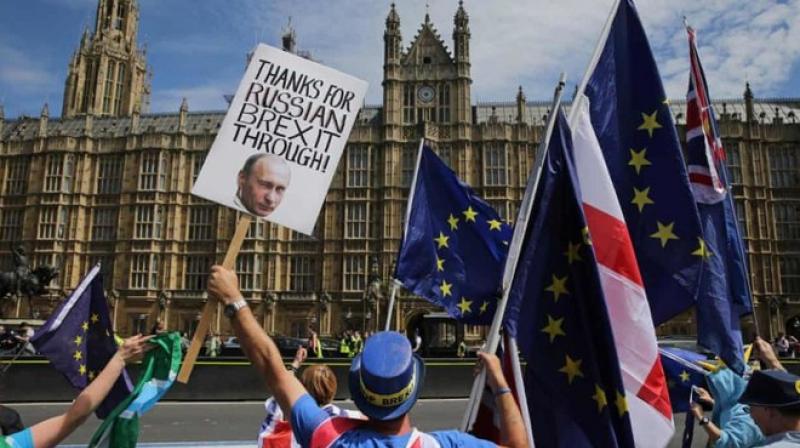 The 50-page report was completed last year but its publication was delayed by the general election in December. (AFP)

London: A long-awaited report into alleged Russian interference in the Brexit vote will be published within days, the British parliament's intelligence and security committee (ISC) said Thursday.

The 50-page report was completed last year but its publication was delayed by the general election in December, which caused all parliamentary committees to be disbanded.

Prime Minister Boris Johnson last week nominated new members to the committee, which oversees the intelligence agencies, and they held their first meeting on Thursday.

"The committee has unanimously agreed this morning that it will publish the report on Russia prepared by its predecessor before the House (of Commons) rises for the summer recess" on the evening of July 22, it said.

The ISC launched the investigation in November 2017 following concerns about attempts by Russia to influence the 2016 US presidential election and fears of meddling in Britain's referendum vote to leave the European Union the same year.

Then prime minister Theresa May had accused Russia of "planting fake stories" to "sow discord in the West and undermine our institutions".

The 2018 poisoning of former Russian double agent Sergei Skripal and his daughter Yulia in Salisbury, southwest England, which London and its Western allies blamed on Moscow, only added to the ISC's concerns.

The report was completed in March last year and cleared by the intelligence agencies in October, but Johnson failed to clear it for publication before the election.

It then had to wait until a new committee was established.

Johnson sparked anger among many MPs for taking so long to nominate the new committee members -- and when he finally did, he faced an immediate revolt.

Downing Street had proposed former minister Chris Grayling to be chairman of the independent cross-party committee.

But in a last-minute manoeuvre, another MP from the governing Conservatives, Julian Lewis, was on Wednesday elected with the support of opposition lawmakers.

Lewis was then expelled from the Conservative parliamentary party for what has been described as a mini-coup.

But he was unrepentant, saying it was "improper" for Johnson to try to impose his own candidate.