British police have arrested 113 people after climate change activists blocked some of London’s most famous roads including Oxford Circus. 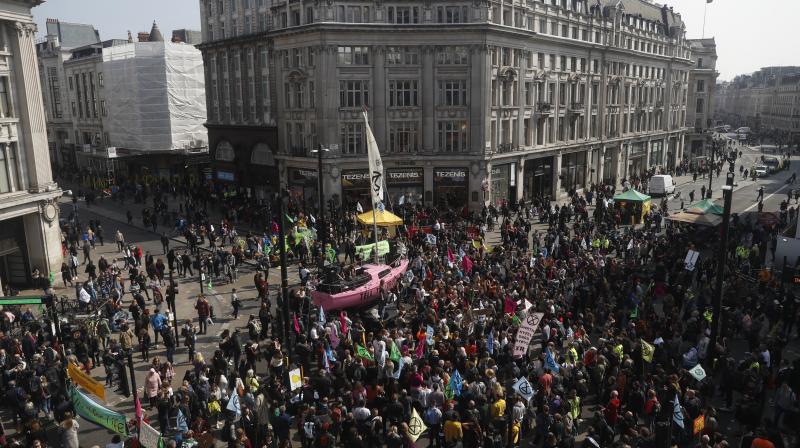 A general view of Oxford Circus occupied by climate change protesters during a demonstration in London. (Photo:AP)

London: British police have arrested 113 people after climate change activists blocked some of London’s most famous roads including Oxford Circus, Marble Arch and Waterloo Bridge in an attempt force the government to do more to tackle climate change.

The protests, led by British climate group Extinction Rebellion, brought parts of central London to a standstill on Monday and some stayed overnight for a second day of protest on Tuesday.

Extinction Rebellion, which generated headlines with a semi-nude protest in the House of Commons earlier this month, is demanding the government declare a climate and ecological emergency and reduce greenhouse gas emissions to net zero by 2025.

“There have been 113 arrests in total, the majority of which are for breach of Section 14 Notice of the Public Order Act 1986 and obstruction of the highway,” London police said.

Tents littered the roads at Oxford Circus with some activists huddled beneath a pink boat with the words “Tell the Truth” across its side. One placard read: “Rebel for Life”.

Police said five of those arrested had been detained after the Shell building near the River Thames was targeted.

Two protesters on Monday scaled up scaffolding writing ‘Shell Knows!’ in red paint on the front of the building and three protesters glued their hands to the revolving doors at the entrance.