India's lawyer Harish Salve argued that there was no guarantee that Jadhav would not be executed while the court was in session. 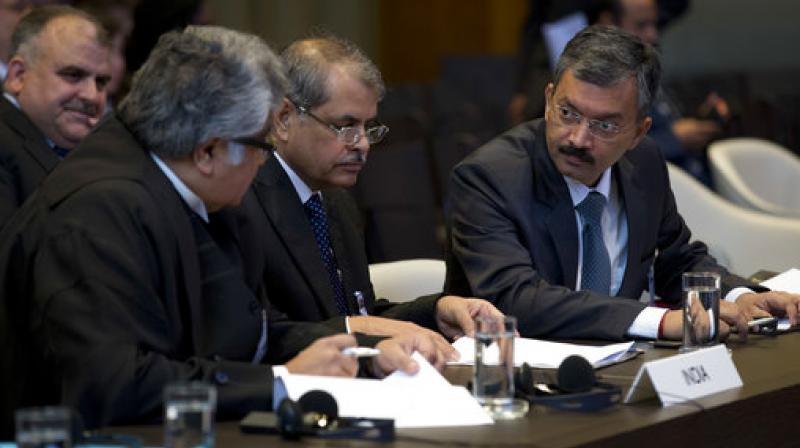 Dr. Deepak Mittal, joint secretary of India's Ministry of External Affairs, right, and his delegation wait for judges to enter the World Court in The Hague, Netherlands, Monday, May 15, 2017. (Photo: AP)

The Hague (Netherlands): The International Court of Justice (ICJ) on Monday began hearing India and Pakistan in the Kulbhushan Jadhav case.

The ICJ, which is holding public hearings in the case at the Great Hall of Justice in Peace Palace at The Hague in Netherlands, has given 90 minutes each to India and Pakistan to present their case.

Jadhav, a former Indian Naval officer, was sentenced to death by a Pakistani military court on April 10, 2017, allegedly for spying for Indian intelligence agency Research and Analysis Wing (R&AW).

Salve asks the court to rule that -
1. Pak should take all measures necessary to ensure that Jadhav is not exceuted
2. Report to the court about its action in pursuance of first point
3. No action should taken which prejudices Jadhav’s and India’s rights

In Paraguay vs USA, the court decided that government of US was asked to take steps to give rights of access of Paraguan national.

In Germany vs USA, court held that execution of the German national was an irreparable damage to justice.