Schulz's SPD won just 31.2 percent of the votes, well below the 39.1 percent it garnered five years ago, final results showed. 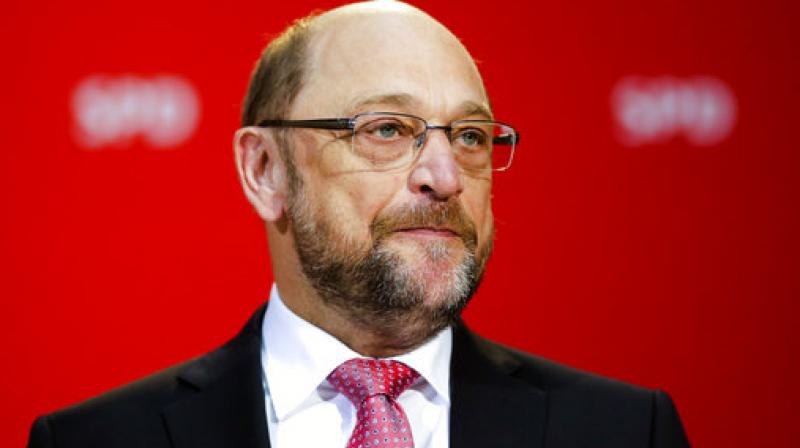 Berlin: Germany's Social Democrat chief Martin Schulz acknowledged Monday that his party faced a "rocky road" to national elections after it was soundly beaten in a key state by Chancellor Angela Merkel's party.

The chancellor, meanwhile, hailed the strong victory in North Rhine-Westphalia on Sunday and vowed to do "everything we can" to ensure that her party also prevails in general elections set for September 24.

Schulz's SPD won just 31.2 percent of the votes, well below the 39.1 percent it garnered five years ago, final results showed.

Merkel's Christian Democratic Union (CDU) gained significant ground in the state, for decades an SPD stronghold, coming in as the top party with 33 percent. She said her party would now gear up for the national campaign.

"We are aware that this new phase will be an exhausting one," she said, but added that the grand right-left coalition led by her party has a good record to show. Schulz, for his part, admitted that "we suffered a difficult moment last night."

"One thing that is totally clear is that, before general elections on September 24, we'll have a long way to go. It is a rocky road, but the SPD is a battle-hardened party and we will put up a fight in the elections," he said.

With a fifth of Germans 13.1 million eligible to vote in North Rhine-Westphalia, elections in the western state are closely watched for hints to the federal outlook.

It carried even higher stakes this year, being the last regional vote before the national election and having a direct impact on the SPD's ability to close a nationwide gap of around 10 percentage points with the CDU.

The SPD had already suffered two setbacks since Schulz took over the party leadership, with the CDU scoring strong victories in the small states of Saarland and Schleswig-Holstein.