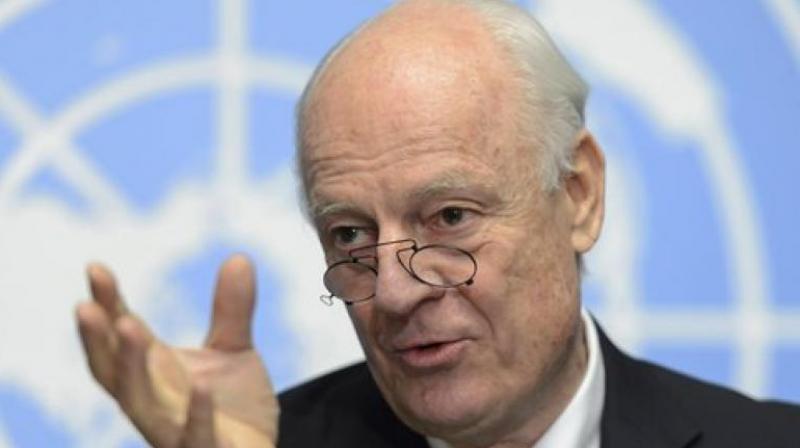 Staffan de Mistura, who is mediating peace negotiations in Geneva, says that a military victory alone in Syria's six-year civil war was not enough for President Bashar al-Assad and that new polls were needed for him to 'win the peace'. (Photo: File)

Geneva:  The United Nations peace envoy for Syria called Thursday on Russian President Vladimir Putin to "have the courage" to convince his ally in Damascus to hold new elections in the war-ravaged country.

Staffan de Mistura, who is mediating peace negotiations in Geneva, said that a military victory alone in Syria's six-year civil war was not enough for President Bashar al-Assad and that new polls were needed for him to "win the peace".

"There needs, straight away, to be a political process that includes everyone to achieve a new constitution and new elections," he told Swiss RTS television.

On Tuesday, the first Russian troops began returning home after Putin ordered a pullout, saying their mission had been largely completed.

De Mistura said Putin "had to convince the (Syrian) government that there's no time to lose".

"We can talk about having won the territorial war, which is temporary, but the peace also needs to be won and for that there needs to be the courage to push the government to accept" new elections, which De Mistura said should be monitored by the UN.

Talks in December, the eight round of UN-brokered negotiations between the Syrian government and rebel factions, have snagged on the issue of Assad's future, with a rebel alliance insisting the president must go as part of any peace deal.

A parallel process organised by Moscow and including fellow government ally Iran and rebel backer Turkey, is set to resume next week in Astana, Kazakhstan.

More than 3, 40,000 people have been killed since the conflict broke out in March 2011 when protests against Assad's rule sparked a brutal crackdown.