The move went against efforts to repair ties between the two countries, which has taken a nose dive. 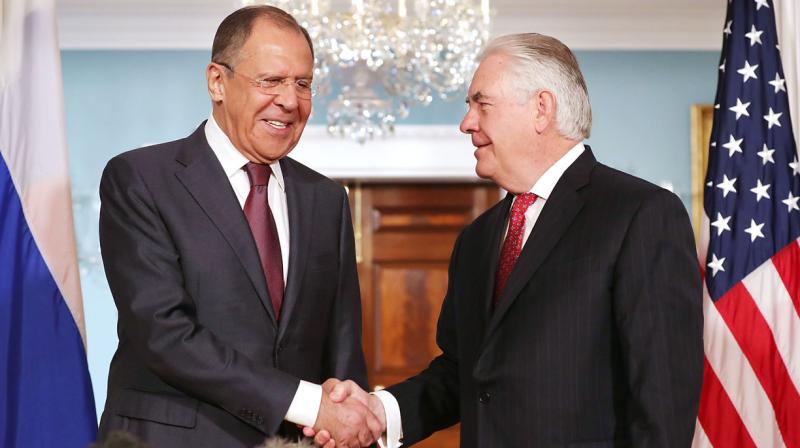 Lavrov said the "arbitrary action by US officials directly contradicts Washington's statements about its intentions to normalise bilateral relations which have fallen to an unprecedented level." (Photo: AFP)

Moscow: Russia's foreign minister Sergei Lavrov on Thursday complained to his US counterpart about the "unacceptable" removal of Russian flags from two of its closed diplomatic missions in the United States.

In a telephone call, Lavrov told Secretary of State Rex Tillerson that the move went against efforts to repair ties between the two countries, which have become increasingly strained.

Lavrov said the "arbitrary action by US officials directly contradicts Washington's statements about its intentions to normalise bilateral relations which have fallen to an unprecedented level," a Russian foreign ministry statement said.

Ministry spokeswoman Maria Zakharova earlier told reporters that Russian flags had been "torn down" from the buildings of the general consulate in San Francisco and Russia's trade mission in Washington.

She added that a "decisive protest" had been lodged and that the "Russian side will decide on retaliatory measures".

The United States in August ordered Russia to close its San Francisco consulate and two other installations as relations between the former Cold War foes took another nose-dive.

Also on Thursday, the Russian parliament's lower house, the Duma, cancelled a visit to the US by a group of lawmakers planned for this month, a Duma spokeswoman said.

"We demand an immediate end to the takeover of our property in the US which is accompanied by offensive actions," he added.

The latest flare-up comes as Jon Huntsman, Washington's new ambassador to Moscow, is preparing to assume his role.

Zakharova warned that the removal of the flags could complicate the beginning of Huntsman's tenure.

Washington ordered the shutdown of the Russian diplomatic missions after the Kremlin demanded that the US slash staff numbers at its missions in Russia.

Moscow also accused the US of searching its missions, including accommodations for diplomatic staff.

The dispute is the latest twist in tortured ties between the US and Russia, which have slumped to their lowest point since the Cold War following the Kremlin's seizure of Crimea from Ukraine in 2014.

The West imposed punishing sanctions on Russia over its meddling in its ex-Soviet neighbour, sparking a revenge embargo from Moscow against agricultural products.

US President Donald Trump initially pledged to improve ties, but those promises have been overshadowed by allegations of collusion between Russia and members of Trump's election campaign.