World   Europe  13 Jul 2021  Is it possible to contract two Covid variants at once?
World, Europe

Is it possible to contract two Covid variants at once? 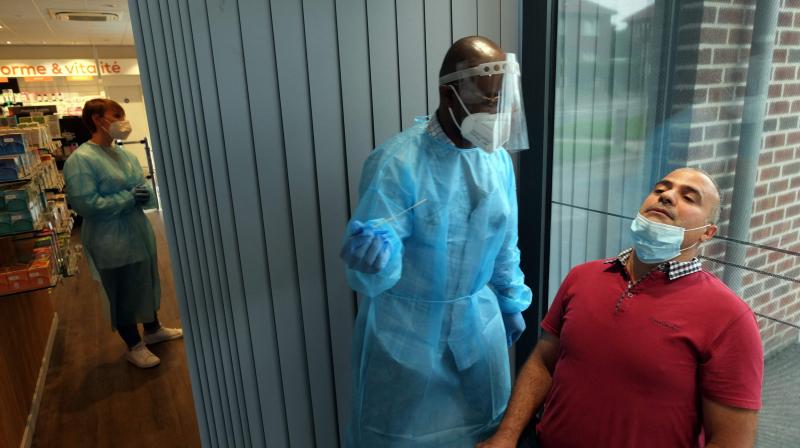 A medical official administers a rapid antigen test to a patient at Pharmacy Servais in Jodoigne, some 45kms south-east of Brussels on July 12, 2021. (Photo: AFP)

Belgium: Is it possible to contract two Covid variants at once? The answer can be YES. Researchers in Belgium on Sunday claimed that the risk of a double variant infection might be underestimated.

Their claims come after a 90-year-old woman died from after being infected with both the Alpha and Beta variants of the novel coronavirus infection, at the same time.

However, no other similar case has been reported till now.

The un-vaccinated woman lived alone in a nursing home in Aalst, Belgium, the research said. She was admitted to the OLV hospital after a reccurring bouts of health issues, and later tested positive for both the variants of Covid.

When she was admitted to the hospital, her oxygen levels were stable and she had no immediate danger. However, her condition deteriorated soon, the hospital said, adding that she died five days later.

“Both these variants were circulating in Belgium at the time, so it is likely that the lady was co-infected with different viruses from two different people,” said OLV Hospital's molecular biologist Anne Vankeerberghen, who led the research.

However, Vankeerberghen claims that it is difficult to determine whether it was the double infection that led to the patient's rapid deterioration or something else.

She added that there had been “no other published cases” of similar co-infections. She also added that the “phenomenon is probably underestimated due to limited testing for variants of concern and the lack of a simple way to identify co-infections with whole genome sequencing”.

The research has not been published yet, and is currently under review by the European Congress of Clinical Microbiology & Infectious Diseases.