The pandemic has killed more than 36,000 people in Britain, according to official statistics 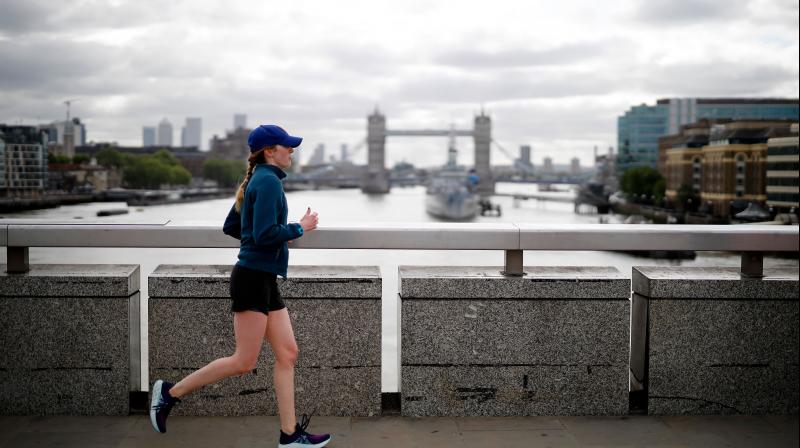 A woman runs across London Bridge, backdropped by Tower Bridge, as she exercises in central London. (AFP)

London: People living in England have more freedom to leave their homes from Wednesday and to go to work if necessary in the first stage of an easing of the coronavirus lockdown.

The pandemic has killed more than 36,000 people in Britain, according to official statistics, and despite a fall in deaths and hospitalisations, officials are still concerned, particularly by the death rates in care homes.

Prime minister Boris Johnson announced on Sunday a gradual easing of the lockdown, which would be dependent on keeping infection rates down.

Residents in England are now able to drive to the countryside, play tennis or golf, see one friend in a public space or visit a garden centre.

But they must at all times remain two metres away from other people, risking a £100 pound fine if they break the rules.

Millions of people who are unable to work from home should also go back to their jobs, under the plan unveiled by Johnson.

Transport minister Grant Shapps urged those returning to the workplace to "cycle or walk" if possible.

"We are asking people to be very sensible and not flood back to public transport," he told Sky News.

"Even with all the trains and buses back to running when they are, there will not be enough space," he added.

People in England can also move house while home viewings are also allowed for the first time since the country shut down on March 23, with more than 450,000 buyers and renters currently caught in limbo.

The easing of restrictions comes as the government attempts to revive the economy, which fell two percent in the first quarter, its worst drop in since the 2008 financial crisis.

The situation is different in Scotland, Wales and Northern Ireland, with people still being asked to "stay at home".

Johnson has been criticised for his multi-stage plan, with opposition parties and the media calling it confusing.

He will face MPs at midday (1100 GMT) on Wednesday during the traditional weekly question time in the House of Commons.