The prime minister promised months ago to invoke Article 50 of the EU's Lisbon Treaty, starting the two-year withdrawal process. 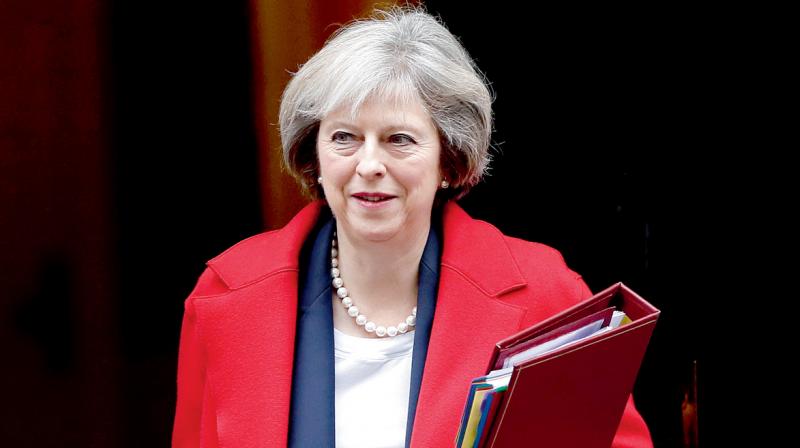 UK Prime Minister Theresa May is expected to trigger Brexit this week by formally informing the European Union of Britain's intention to leave the bloc.

London: UK Prime Minister Theresa May is expected to trigger Brexit this week by formally informing the European Union of Britain's intention to leave the bloc, sending her country into uncharted waters.

The legislation empowering May to put Britain on a course that no member state has ever taken returns to parliament for its final stages on Monday as European capitals prepare for mammoth negotiations.

After heated debate and a delay in the upper House of Lords, the bill could win final approval by both Houses by Monday evening - leaving May's path clear to begin Brexit whenever she wants.

The prime minister promised months ago to invoke Article 50 of the EU's Lisbon Treaty, starting the two-year withdrawal process, by the end of March.

Last week she expressed her impatience, telling reporters at a Brussels summit: "Our European partners have made clear to me that they want to get on with the negotiations, and so do I."

Irish premier Enda Kenny revealed at the same summit that the EU was preparing for Article 50 from Wednesday, while Britain's opposition Labour party has also spoken of Wednesday or Thursday.

Once May has notified the EU of her decision by letter, the other 27 EU leaders will take some 48 hours to issue their first draft proposal for the negotiations but talks are not actually expected to begin for months as both sides finalise strategies.

EU leaders have planned a follow - up meeting on April 6, "provided that the prime minister moves Article 50, I think by March 15th", Mr Kenny said.

Triggering Article 50 this week would put Britain on course to leave the European Union by March 2019 - a prospect that has caused concern about the future of European unity in some capitals.

But unravelling four decades of membership and forging new trade ties to replace Britain's membership of the single market within two years will be fiendishly complex.

EU leaders are determined that Brexit will not undermine the unity of the bloc, and that the final terms do not encourage other member states to follow Britain.

There have already been sharp exchanges, although European Commission head Jean-Claude Juncker voiced hope that Britain would one day return.

"I would like to be in the same boat as the British. The day will come when the British will re-enter the boat, I hope," he said last week.

May was forced to introduce the two-clause bill empowering her to trigger Article 50 after the Supreme Court ruled in January that she must seek parliament's approval to start Brexit.

The bill was held up earlier this month by amendments passed in the unelected House of Lords, demanding guarantees for EU nationals' rights and a parliamentary vote on the final withdrawal deal.

The Conservative government has given assurances on both issues, but says it does not want to tie its hands in the EU negotiations.

MPs in the lower elected House of Commons, where May has a majority, overwhelmingly supported the bill in its first stage last month.

Ministers are hopeful the Commons will overturn the Lords amendments in a vote on Monday afternoon, although some europhile Conservative MPs may rebel.

The bill would then return to the Lords later that evening for final approval, where further opposition is possible, but unlikely.

Adding to the day of drama in Westminster, anti-austerity and pro - immigration campaigners are set to protest outside parliament later on Monday to urge MPs to guarantee the status of the three million EU nationals living in Britain.

Downing Street has played down speculation that May could announce the start of Brexit during a planned statement to MPs on the EU summit on Tuesday.

Triggering Article 50 this week would cheer eurosceptics in May's Conservative party, which is holding a conference in Wales on Friday and Saturday.

It could also encourage the Scottish nationalists who hold power in the devolved government in Edinburgh, who are also meeting on Friday.

Scotland voted to stay in the EU, but Brexit supporters in England and Wales pushed through the final result of 52 percent to 48 percent to leave.