And in Italy's migrant-saturated southern ports, prising these young Nigerian girls away from their traffickers is a formidable challenge. 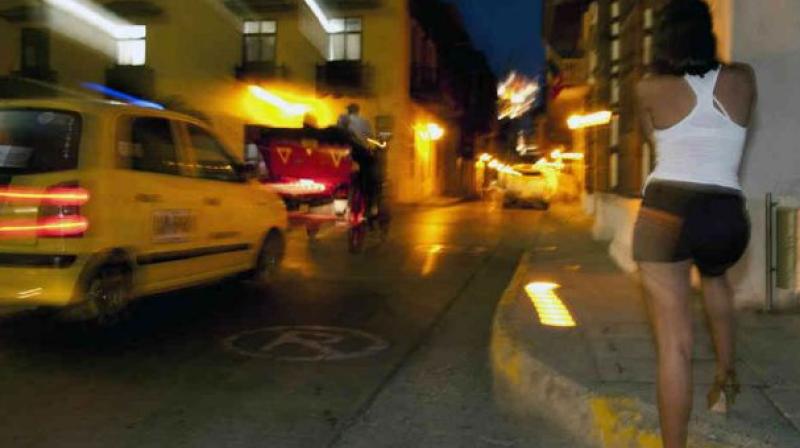 Rome: They arrive in their hundreds every month, their heads full of dreams of new lives in Europe. In reality, many of them are destined for years of sexual slavery.

And in Italy's migrant-saturated southern ports, prising these young Nigerian girls away from their traffickers is a formidable challenge.

With each new landing of migrants rescued at sea, the well-worn processing procedures have an almost ritualistic aspect to them: a first identification interview, cuddly toys for the children and a specialist from the International Organization for Migration paying particular attention to any young women.

Nigerian females have been landing in Italy in significant numbers since the 1980s, lured by the promise of jobs only to find themselves with colossal debts to the traffickers who got them here.

"We estimate that between 70 and 80 percent of them are in danger of being forced into prostitution," said the IOM's Luca Pianese, adding that the numbers do not include hundreds of minors.

Some of the women will end up working on the streets of Italy, others in France, Spain, Austria or other European countries where demand seems to grow incessantly.

Pianese, who works as part of a 13-strong team that includes two women of Nigerian origin, has learned how to spot the signs that newly arrived women have been trafficked.

Most of the victims come from Edo state in southern Nigeria, they invariably have had only the most basic education and say they can remember little about how they got from Nigeria to the Mediterranean.

Usually the women have a phone number they have been told to call when they arrive.

Sometimes they will be accompanied by a minder. "You have to separate them from false sisters and pretend husbands," said Pianese.

Then comes the painful bit. "They arrive here full of hope, confident they are headed for a better future," the aid worker says.

"Unfortunately our duty is to smash their dream."

That involves explaining that the future envisaged for these young women involves long hours perched on the edge of out-the-way roads, servicing 10 to 20 clients a day for less than 20 euros (dollars) a time with no guarantee that some of the punters will not be violent.

There is also some positive news to be shared: Italian law guarantees residency rights and social support to women trafficked for prostitution, even if they have not got to the stage of being forced to sell their bodies in Italy.

Despite that, the IOM says barely 300 women accepted such help between the start of 2015 and the end of August.

According to Nigerian nun Monica Chikwe, who coordinates a network of safe houses for trafficked African women, that is not surprising.

In Nigeria, "no one tells the truth" and when they hear about Europe "all the girls can see are sequins", she says.

For many, abuse and violence starts en route, in particular in Libya. Yet a degree of gratitude persists alongside fear of the people smugglers who, after all, have delivered on their promise to get them to Europe.

Even those women savvy enough to suspect that all might not be as it has been presented to them have little idea of the violence that awaits them -- or how hard it will be for them to repay the debts they have incurred.

"These are sums way above what other migrants have paid," says Maurizio Scalia, a public prosecutor in Palermo in Sicily who has been helping to track down individual traffickers and now wants to expand the scope of his investigation to "get a picture of the whole system".

Adding to the problems involved in smashing the smugglers' business model is the fact that many of the victims have taken part in voodoo ceremonies before they leave Nigeria and fear reprisals against their families if they do not pay back their debts.

As a result, most of them will maintain a stony silence until they reach reception centres, where traffickers will come to find them. In such cases, all the IOM can do is give them an emergency number they can call at any time.

Sometimes it works. Earlier this month Sicilian police were able to liberate a young Nigerian who had landed on October 24 and dialled for help after being kidnapped by three of her compatriots and told she would have to prostitute herself to reimburse 30,000 euros.

The toll-free number received some 150 calls in 2015 and the first half of this year.

They are already nearly all full.