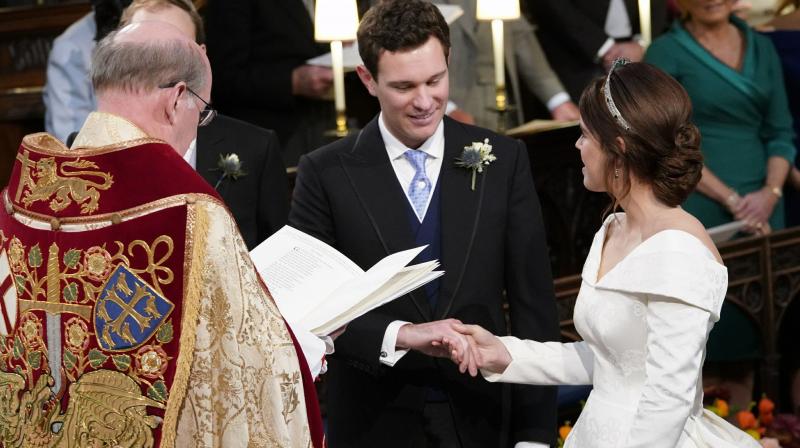 The nuptials have drawn most senior members of the royal family, including Eugenie's grandmother, Queen Elizabeth II, who will host a champagne luncheon for the newlyweds shortly after the ceremony. (Photo: AP)

Windsor: Crowds are gathering outside Windsor Castle ahead of Britain's second royal wedding of the year Friday with Princess Eugenie set to wed a tequila brand executive in a gala ceremony.

Eugenie and Jack Brooksbank are to marry at St George's Chapel, which is part of the castle complex, on a gusty day that required early arrivals to hold onto their elegant hats as they crossed the manicured grounds.

The nuptials have drawn most senior members of the royal family, including Eugenie's grandmother, Queen Elizabeth II, who will host a champagne luncheon for the newlyweds shortly after the ceremony.

The couple will marry in the same venue used in May by Prince Harry and Meghan Markle, who is now known as the Duchess of Sussex.

The royal standard was flying atop the complex Friday, indicating that the queen was in residence.

Harry and Meghan are attending, along with Prince William and his wife Kate, the Duchess of Cambridge. Their 5-year-old son, Prince George, will be a page boy, and Princess Charlotte, 3, will be one of six bridesmaids.

Eugenie, 28, is ninth in line to the British throne. She works in the art world. Her sister, Princess Beatrice, will be maid of honor.

They are the daughters of Prince Andrew and Sarah Ferguson, who are divorced but enjoy an amicable relationship.

Eugenie and Brooksbank, 32, have dated for many years. He proposed to her in January during a trip to the Central American country of Nicaragua, choosing a romantic spot next to a lake and a volcano. Eugenie told ITV, which will broadcast the hour-long service in Britain, that she was both excited and a bit on edge.

"It's nerve-wracking and a bit scary and all the things that come with getting married, but at the end of the day you get to marry the person you love," she said.

The couple has invited 1,200 members of the public to come onto the castle grounds for a closer glimpse of proceedings. They also plan to take a carriage ride through parts of Windsor just after the ceremony.