This comes at the time when the Pakistan government has submitted a dossier in UNHRC over Kashmir. 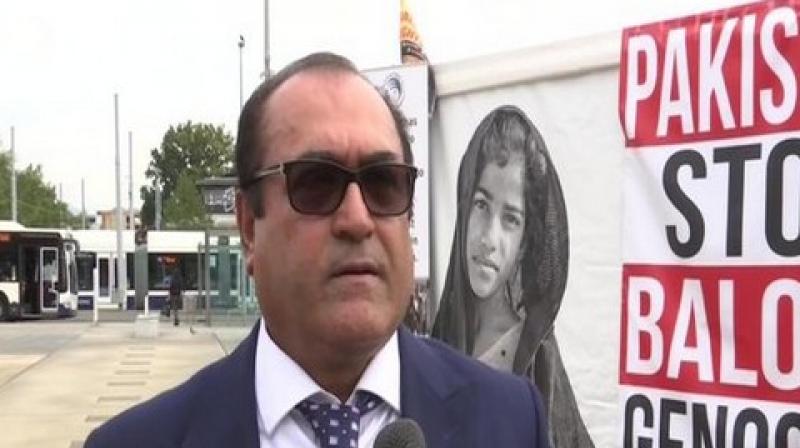 He added that the aid provided to Pakistan by foreign countries and international organizations to combat terrorism in its soil is instead being used to build madrassas for funding illegal activities and train suicide bombers for carrying out terror activities in the region. (Photo: ANI)

Geneva: Pakistan has become a breeding ground of terrorists, alleged a Baloch activist, adding that the country has become a threat to the world and especially its neighbors due to its lawlessness and injustices towards the minorities.

"Pakistan is a breeding ground for terrorism. Pakistan is not only committing systematic genocide of Baloch people but also involved in the genocide of our Sindhi brothers, Pashtuns. It's also a threat for the world because it is a rogue state, there is no law, no justice," Samad Baloch, the Secretary-General of Baloch Human Rights Council, told ANI.

He added that the aid provided to Pakistan by foreign countries and international organizations to combat terrorism in its soil is instead being used to build madrassas for funding illegal activities and train suicide bombers for carrying out terror activities in the region.

"The establishment sends their own sons and daughters to accomplish higher studies in western countries but brainwashes our children to join the madrassas and spread jihad under false propaganda of seeking salvation," the activist said.

When asked regarding Islamabad's claims to have launched a crackdown on terror organizations in a bid to avoid black-listing by the Financial Action Task Force (FATF), Samad stressed, "Such is not the case. The entire media, politicians, and military of Pakistan are lying to the world. The country is already on the deathbed and therefore global money lenders, including IMF and World Bank, are hesitant in providing loans to the cash-strapped nation."

Exposing Pakistan against its false narrative over Kashmir at the 42nd UN Human Rights Council (UNHRC) session here, the Baloch leader added that Pakistan is committing "systematic genocide" of the minorities.

"We have suffered a lot. Our socio-cultural, economic rights have been denied. Balochistan has been plundered, they have looted our resources. Balochistan is rich in minerals and natural resources, yet the people suffer," Baloch said.

Not only Samad, but many other activists have also called out Islamabad for committing Human Rights violation against the religious minorities.

This comes at the time when the Pakistan government has submitted a dossier in UNHRC over Kashmir.

At the UNHRC session, Foreign Minister Shah Mahmood Qureshi presented a false narrative on Kashmir maintained by his country following the Indian government's historic move to abrogate Article 370. However, Pakistan has been strongly reprimanded by Indian delegation.

"Article 370 is India's internal matter," said the leader while dismissing Pakistan's false rhetoric over Kashmir that has topped the table to distract international attention since India abrogated the special constitutional status of the region.

"Pakistan, at first, needs to address its own crisis. The country, which was originally a part of India, had forcibly annexed our territory. We don't have anything in common. Neither do the people of Pakistan and Balochistan speak the same language. Also, Pakistan is not as secular as India that it will provide equal benefits to people irrespective of their culture and ethnicity," Samad stressed.

Islamabad has reportedly been discriminating against its religious minorities which is manifested in various forms of targeted violence, mass murders, extrajudicial killings, abduction, rapes, forced conversion to Islam, etc., making the Pakistani Hindus, Christians, Sikhs, Ahmadiyyas and Shias one of the most persecuted minorities in the region.

Last month, the United States, the United Kingdom and Canada had raised the issue of suppression of religious freedom by Pakistan and slammed the country for "persecuting and repressing" their religious minorities.