The massive ice cube, larger than the US state of Delaware, has a volume twice that of Lake Erie, one of the Great Lakes. 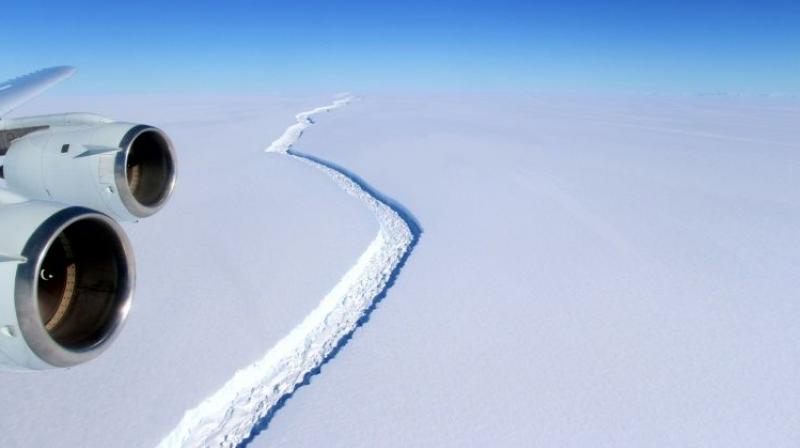 An aerial view of the Larsen C ice rift in Antarctica, seen in an image received from NASA via Swansea University (Photo: AFP)

Paris: A trillion-tonne iceberg, one of the largest ever recorded, has snapped off the West Antarctic ice shelf, scientists who have monitored the growing crack for years said on Wednesday.

"The calving occurred sometime between Monday, July 10 and Wednesday, July 12, when a 5,800-square kilometre (2,200-square mile) section of Larsen C (ice shelf) finally broke away," the Swansea University said in a statement.

The massive ice cube, larger than the US state of Delaware, has a volume twice that of Lake Erie, one of the Great Lakes. It is about 350 metres (1,100 feet) thick.

"The iceberg weighs more than a trillion tonnes, but it was already floating before it calved away so has no immediate impact on sea level," the team said. It will likely be named A68.

With the calving, the Larsen C ice shelf lost more than 12 percent of its total surface area.

Icebergs calving from Antarctica are a regular occurrence. But given its enormous size, the latest berg will be closely watched as it travels, for any potential risk to shipping traffic.

The calving may have heightened the risk of the remaining ice shelf disintegrating, the Swansea team said.

Ice shelves float on the sea, extending from the coast, and are fed by slow-flowing glaciers from the land.

They act as giant brakes, preventing glaciers from flowing directly into the ocean.

If the glaciers held in check by Larsen C spilt into the Antarctic Ocean, it would lift the global water mark by about 10 centimetres (four inches), researchers have said.

The calving of ice shelves occurs naturally, though global warming is believed to have accelerated the process.

Warmer ocean water erodes the underbelly of the ice shelves, while rising air temperatures weaken them from above.

The nearby Larsen A ice shelf collapsed in 1995, and Larsen B dramatically broke up seven years later. The final break was detected by a NASA satellite.

"We will continue to monitor both the impact of this calving event on the Larsen C ice shelf and the fate of this huge iceberg," said lead investigator Adrian Luckman of the university's MIDAS project.

The fate of the berg is hard to predict. It may stay in one piece, but could also break into fragments.

"Some of the ice may remain in the area for decades, while parts of the iceberg may drift north into warmer waters," said Luckman.

The team said the calving at the iceberg cannot be directly placed at the door of global warming, describing it as a "natural event".

Human actions have lifted average global air temperatures by about one degree Celsius (1.8 degrees Fahrenheit) since pre-industrial levels, according to scientists. Antarctica is one of the world's fastest-warming regions.