US set to play Patriot games in Baltic region

Missiles may be deployed amid tensions with Russia. 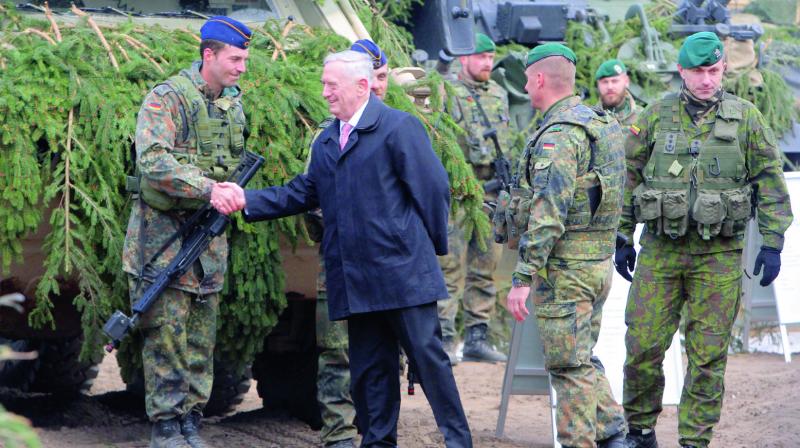 US defence secretary James Mattis shakes hands with a German soldier as he meets with US troops deployed in Lithuania, with representatives of the Lithuanian Armed Forces and soldiers of the Nato-enhanced Forward Presence Battalion Battlegroup in Lithuania, in Pabrade. (Photo: AP)

Vilinus: The US military is considering to send a Patriot missile battery to the Baltic region for NATO exercises this summer, US defence officials said, though the move would only be temporary.

Speaking to reporters in Vilnius late on Tuesday, two defence officials said the US is moving enhanced air defence assets into the region as part of multinational air drills. The move comes amid heightened tensions with Russia, which is itself holding massive military exercises in Belarus and Kaliningrad in September.

Pentagon chief Jim Mattis was in Lithuania on Wednesday to visit a German Nato battle group and Dutch and Belgian soldiers at a training ground outside Vilnius.

“Any buildup of Russian combat power in an area where they know, and we all know, they are not threatened by anything that we are doing in Lithuania or elsewhere in the democratic countries, any kind of buildup like that is simply destabilising,” Mr Mattis said at a brief press conference with Lithuanian President Dalia Grybauskaite. He refused to discuss whether Vilnius had requested a permanent Patriot missile deployment. “We will make those decisions in consultation with the Lithuania government,” he said. “Everyone knows this is not an offensive capability.”

The Patriot is a mobile air defence system made by Raytheon, designed to intercept tactical ballistic missiles, low-flying cruise missiles and aircraft.

Mr Mattis’ trip to Lithuania is his first to eastern Europe as def-ence secretary and his meeting with Grybauskaite, a very vocal critic of Russian leader Vladimir Putin, could be interpreted as a signal for Moscow.