The video shows the young turbaned girl bravely relate the incident, which took place at Plumstead playground in south-east London. 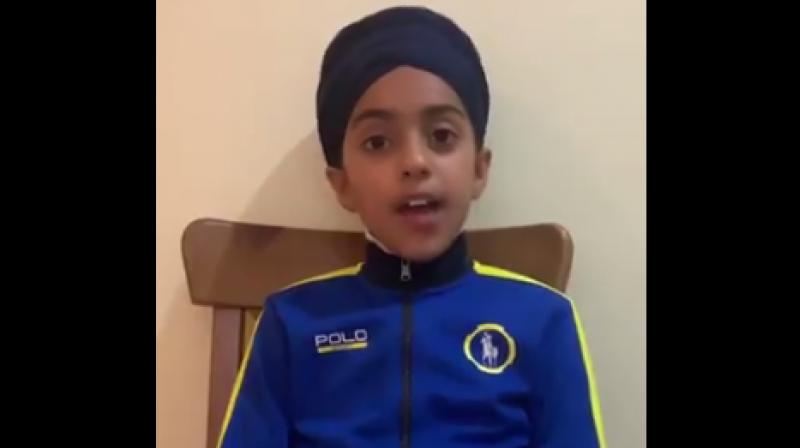 Munsimar Kaur's video message, posted by her father on Twitter, has attracted over 47,000 views already since it was went live on Thursday. (Photo: Screengrab)

London: Branded as a "terrorist" at a London playground, a 10-year-old British Sikh schoolgirl has hit back with a social media message saying greater "exposure and knowledge" should be promoted about the community to "handle racism".

Munsimar Kaur's video message, posted by her father on Twitter, has attracted over 47,000 views already since it was went live on Thursday.

The video shows the young turbaned girl bravely relate the incident, which took place at Plumstead playground in south-east London earlier in the week.

"On Monday and Tuesday at a park, I was greeted not very nicely by four kids and a mother of a young girl," says Kaur, reading from a notebook in which she has written about her experience.

"On Monday, two boys who looked like 14 to 17 years old and two girls who looked like they were in their late teens – when I asked to play the game they were playing and the queue was a mile long – they said, loud and clear, 'no, you can't play because you are a terrorist'," she recounts.

Kaur speaks of how the words obviously broke her heart, but she kept her "head up and walked away". She returned to the same adventure play area the next day when she made a friend with a nine-year-old girl.

"After an hour, her mum called her and said she can't play with me because I was, apparently, dangerous," she says, defending the young girl who apologised for this as it was not her fault.

In her message to the world, Kaur notes: "This experience has shown me the lack of exposure and knowledge some people have. And Sikhs are naturally caring and no matter what, we will love everyone."

"But I need to speak out about this because not everyone is strong enough to walk away or has suitable parents to talk to and handle this racism. I will hang out with the right people."

My eldest daughter Munsimar Kaur, aged 10, tells her own true story. Today it was my child tomorrow it could be yours. #sikh pic.twitter.com/NwR4iFUUE7

On an optimistic note, she calls on anyone else going through similar racism to speak to their parents and keep their chin up because it will all work out in the end. Her video has attracted scores of messages of support, with people applauding the schoolgirl's "class act" and praising her for her courage.

"You are a truly inspiring individual Munsimar! Such courage and eloquence in your words – sadly racism persists but we can collectively value diversity and inclusion," said Gurch Randhawa, Professor of Diversity in Public Health at the Institute for Health Research at the University of Bedfordshire.