Strikes were called in Germany, Sweden, Ireland, Belgium and the Netherlands. 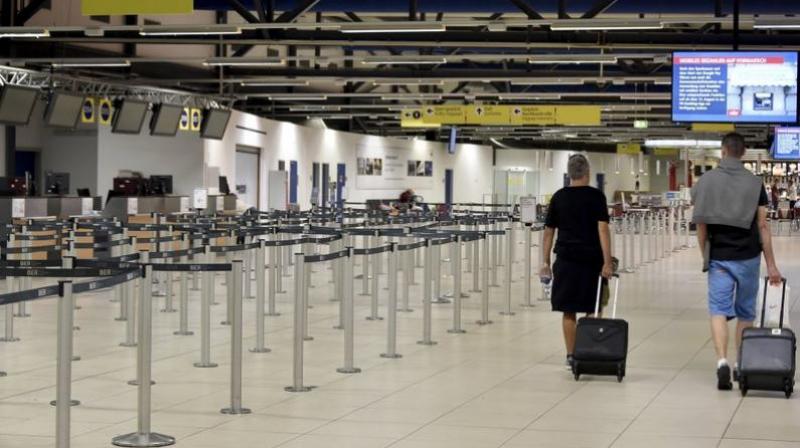 Passengers walk through the empty departure hall of the Schoenefeld airport near Berlin on Friday. (Photo: AP)

Berlin: Ryanair pilots in several European countries on Friday staged a strike that prompted the budget carrier to cancel 400 flights.

A walkout called by German union Cockpit accounted for many of Friday’s cancellations. Strikes were also called in Sweden, Ireland, Belgium and the Netherlands.

The airline said that over 2,000 flights, or 85 percent of its schedule, would operate as normal and that the majority of passengers affected have been re-booked on other Ryanair services.

German pilot representatives said Wednesday they were joining the strike action with a 24-hour walkout, ending at 2.59 am Saturday, because they want pay and work conditions comparable to those at Ryanair’s competitors.

The company calls the strikes “regrettable and unjustified,” pointing to recent pay increases and invitations to meet for negotiations.

Ryanair built its low-cost business model without unions, but said last year it would recognize them. Labor representatives are seeking collective-bargaining agreements in the different countries.

The airline has already been hit with strikes by flight attendants in Spain, Portugal and Belgium. Irish pilots have held four strike days.

In the Netherlands, the carrier was using non-striking pilots to keep its service running for passengers. In a tweet Thursday night, the company said that “there will be no cancellations as a result of the unnecessary strike action by the Dutch pilot union.”

Ryanair launched unsuccessful legal action in a Dutch court to prevent the strike in the Netherlands.

In Sweden, some 40 Ryanair pilots walked out to demand a collective labor agreement.

Martin Lindgren, head of the Swedish Air Line Pilots Association, said that “a strike is necessary to show the airline that it no longer can avoid treating its employees in a dignified manner.”

Ryanair called on the unions “to continue negotiations instead of calling any more unjustified strikes.”