This unidentified virus has caused 1,772 deaths in the first six months of 2020, including 628 people in June alone 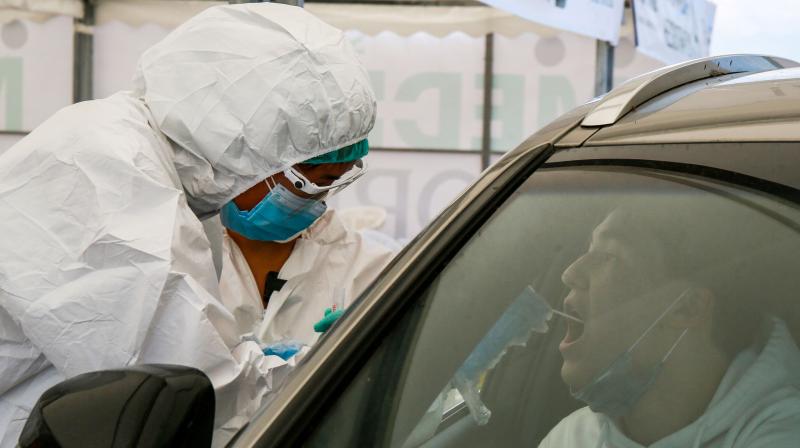 A healthcare worker gives a COVID-19 test to a medical staff near Halyk Arena in Almaty. (AFP)

Beijing: China has warned its citizens living in Kazakhstan of a local "unknown pneumonia" which, it said, has a "much higher" fatality rate than the COVID-19 disease.

The "unknown pneumonia in Kazakhstan caused 1,772 deaths in the first six months of the year, including 628 people in June alone", the Chinese embassy in the central Asian country said in a statement on its WeChat platform on Thursday, adding that the fatalities also included Chinese citizens.

"The fatality rate of the disease is much higher than COVID-19," state-run Global Times quoted the embassy's statement on Friday.

Many organisations including Kazakhstan's health department are studying the "virus of this pneumonia", the embassy said.

There has not been any indication whether this disease is related to the COVID-19.

Some Chinese experts said that measures should be taken to prevent the pneumonia from spreading into China.

The embassy is reminding the Chinese citizens in Kazakhstan to raise their awareness of measures to prevent the spread of the virus.

It quoted local media as saying that since mid-June, almost 500 people have been infected with pneumonia in three regions of Kazakhstan.

Kazakhstan's healthcare minister on Wednesday said that the number of patients sickened by the pneumonia is two to three times more than those who have been infected with the COVID-19, the report quoted Kazakh media as saying.

The minister said that it has planned to publish accurate tallies of confirmed cases as early as next week, noting that while it is not necessary to publish the number, the public needs to know the true situation, Kazakh international news agency Kazinform reported.

Kazakhstan has reported 51,059 cases of COVID-19, including 264 deaths, according to Johns Hopkins University's coronavirus resource centre.

The US and many countries have accused China of hiding the COVID-19 data from the world.

However, China has denied covering up the extent of its coronavirus outbreak and accused the US of attempting to divert public attention.