PM asked for UK's cooperation for return of escaped Indian economic offenders, MEA spokesperson said in a tweet after Modi met May. 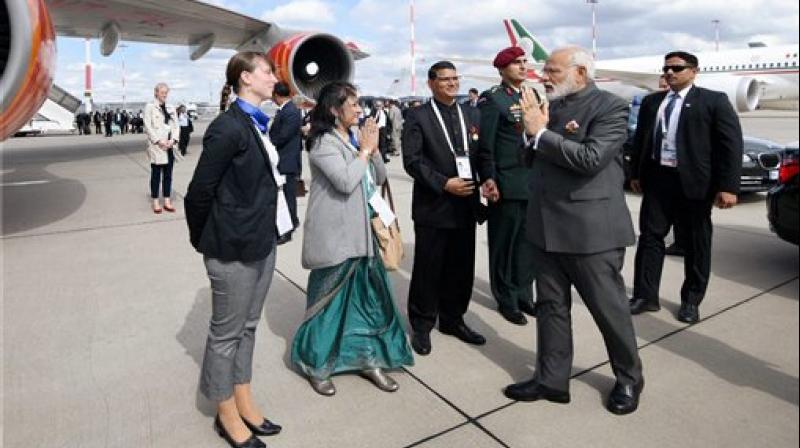 Hamburg: Prime Minister Narendra Modi on Saturday left for home after concluding his engagements at the G20 Summit in Germany, where the theme this year was 'Shaping an Inter-connected World'.

Modi had flown to Hamburg from Tel Aviv, Israel, on July 7 in what was the first visit of an Indian prime minister to the Jewish nation.

He pressed upon his British counterpart Theresa May to ensure UK's cooperation to bring back economic offenders, amidst India working hard for the return of fugitive liquor baron Vijay Mallya and former IPL chief Lalit Modi.

Mallya has been in the UK for months, escaping arrest warrants against him, while a court in London is also hearing a case regarding his return to India.

Modi on Saturday met May during a bilateral meeting on the sidelines of the G20 Summit in Hamburg and sought UK's help in this regard.

Both leaders also talked about the complete range of India-UK ties.

On economic offenders issue, Baglay said, "you have seen our tweet".

On whether cooperation from the UK was sought with just Mallya in mind, he said, "The tweet mentions economic offenders who have escaped from India and that is the answer".

To a query on whether Mallya was in focus in terms of escaped economic offenders discussed with May, Baglay said, "We have put out a tweet and the term used there is a plural...it's English language and people who know English should understand it".

Asked whether all on the list were discussed and no specific names were mentioned, he said, "I won't like to go into that and what we have said in the tweet is what our position is".

He called on G20 nations to do more to encourage manpower mobility to bring net value to host and source nations. Modi while speaking at a session on ‘Digitalisation, Women’s Empowerment and Employment: Borderless digital world represents opportunities but also risks’, highlighted India's journey to the low-cost, world-class technology. He also asked the member nations to promote digitisation for strengthening labour markets and improving delivery of services.

The Prime Minister expressed strong personal conviction for gender empowerment and said that there was no real growth without empowering women, External Affairs Ministry Spokesman Gopal Baglay said. At the end of the session, he also asked the G20 nations to create a strong partnership for skilling, including exchange of best practices.

India and other G20 members made a strong commitment to fight corruption, including areas of public administration, by putting in place necessary institutional frameworks in their respective countries.

The leaders on Saturday adopted 'G20 High Level Principles on Organising against Corruption', which noted that corruption hampers the efficient and effective operation of government, as well as its fairness and impartiality of decision-making and the delivery of government services.

"A public administration, resilient against corruption, underpinned by a culture of integrity, accountability and transparency not only fosters citizens' trust but can also affect the attractiveness of a country as a business location," it added.

The G20 Anti-Corruption Action Plan 2017-2018 identifies public sector integrity and transparency including organising against corruption (such as structuring the public administration to detect and minimise corruption risks) as a priority.

G20 countries have already committed themselves to a number of measures to strengthen transparency and integrity in the public sector, including requirements for the conduct public officials.

However, corruption prevention measures with regard to the organisational structure and work flow management are also essential for the fight against corruption, the leaders said.